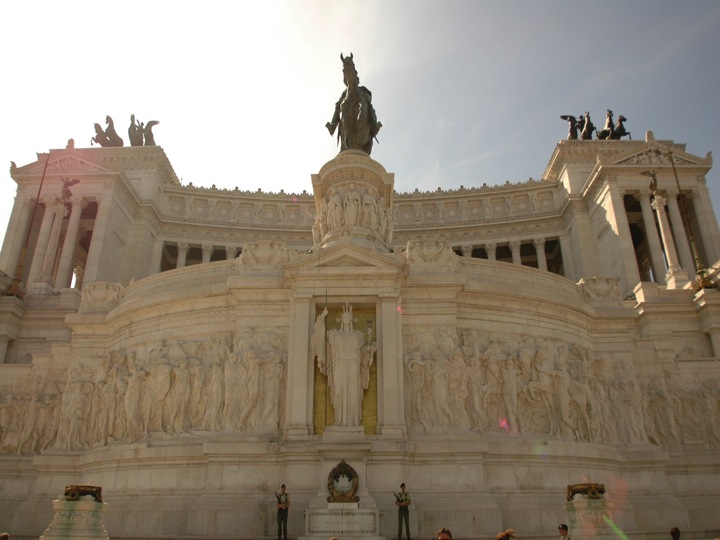 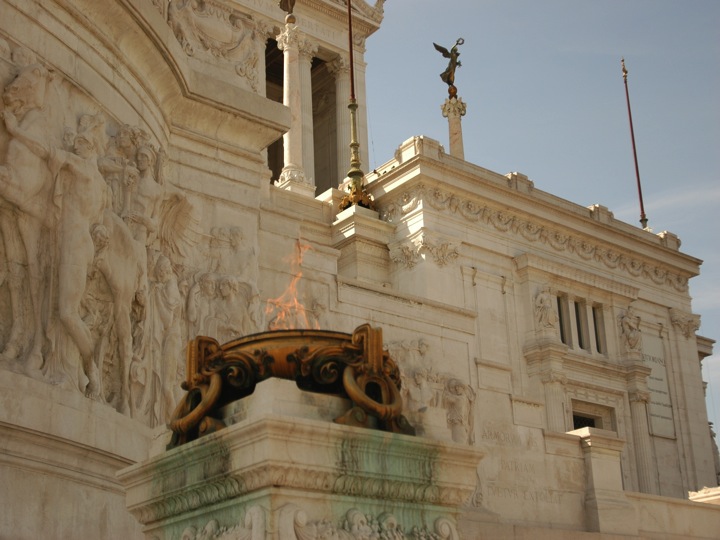 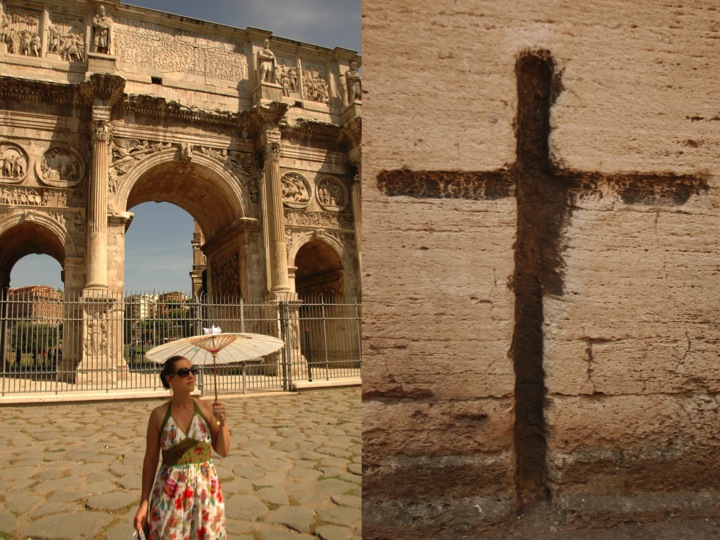 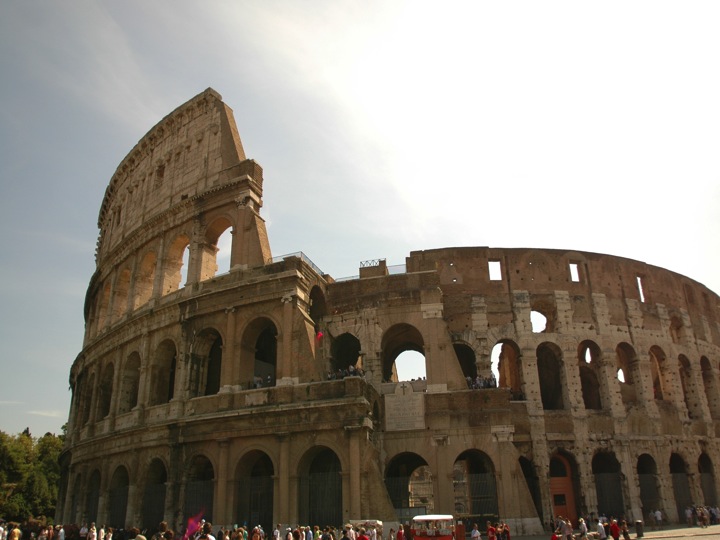 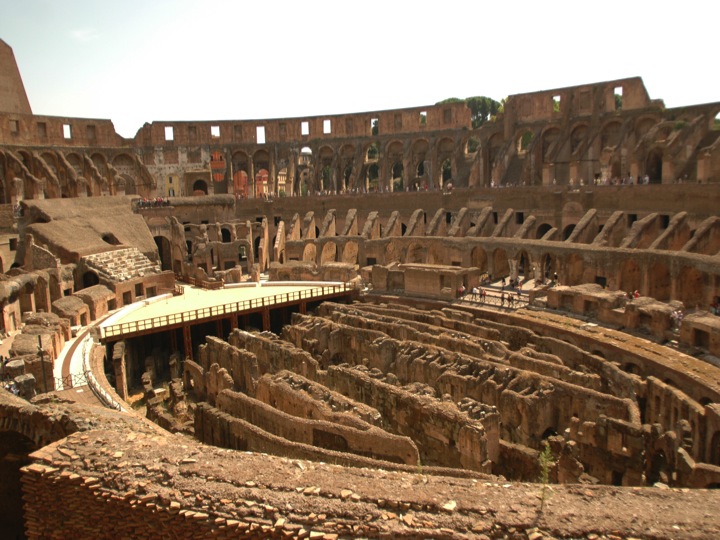 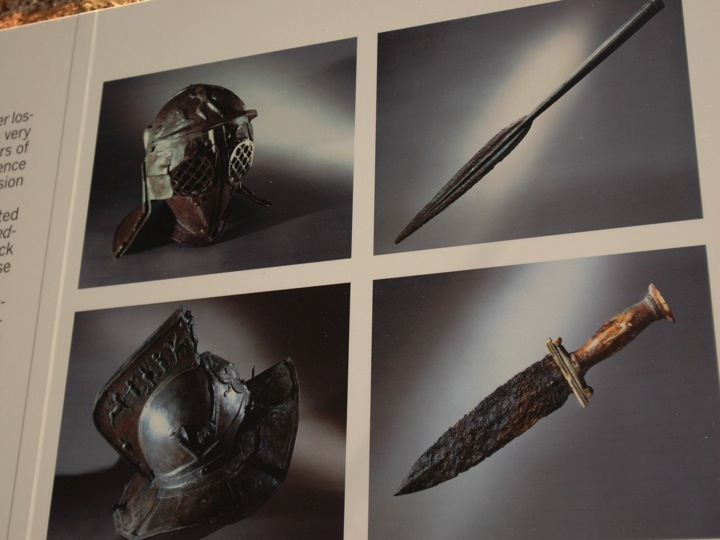 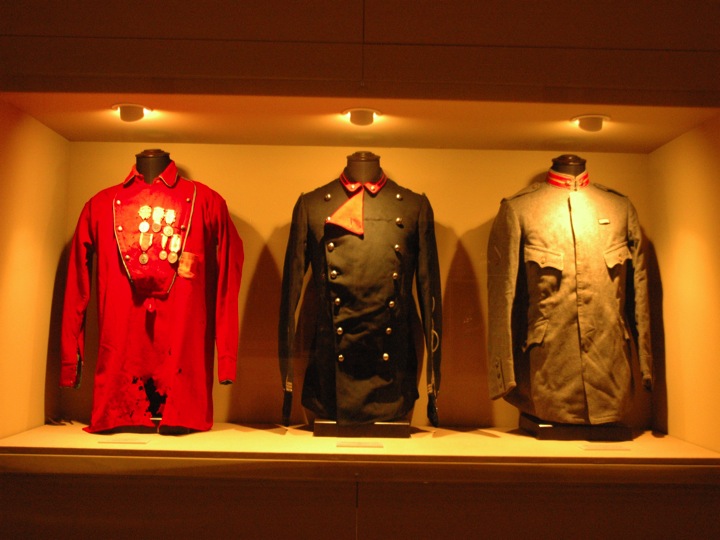 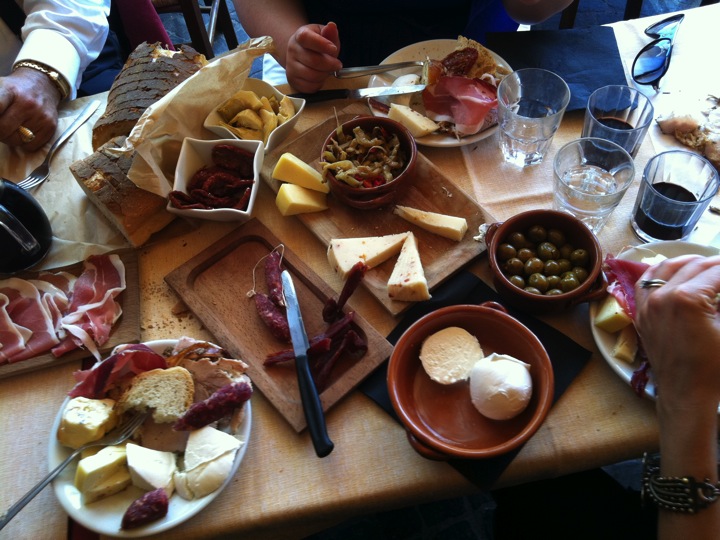 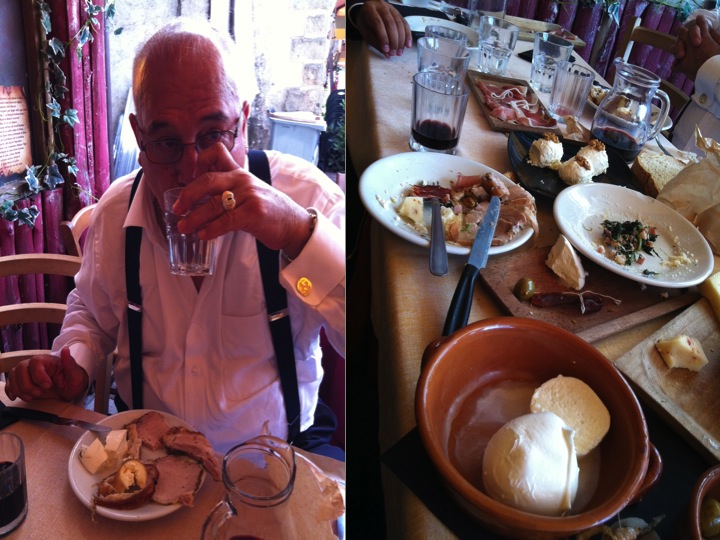 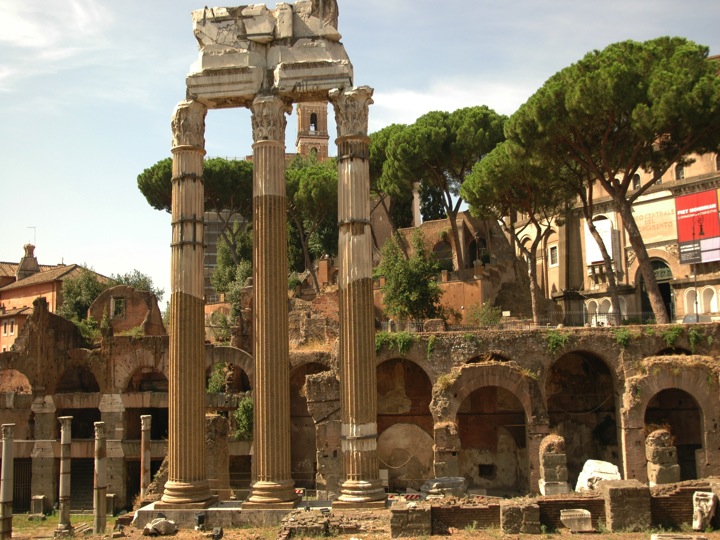 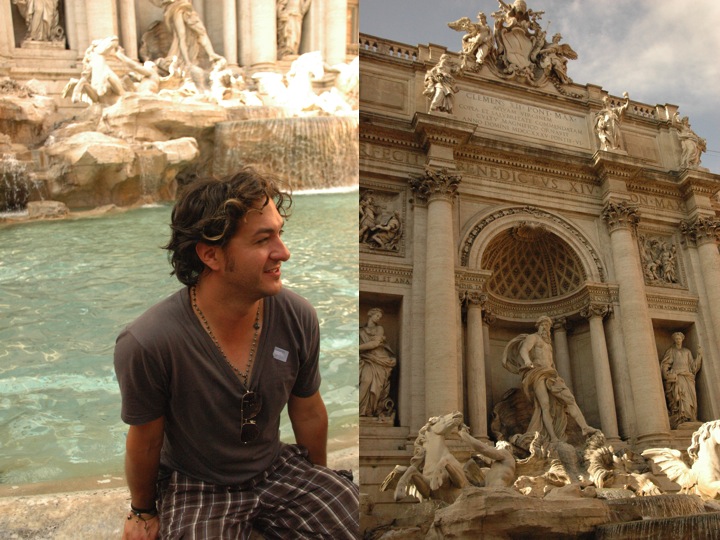 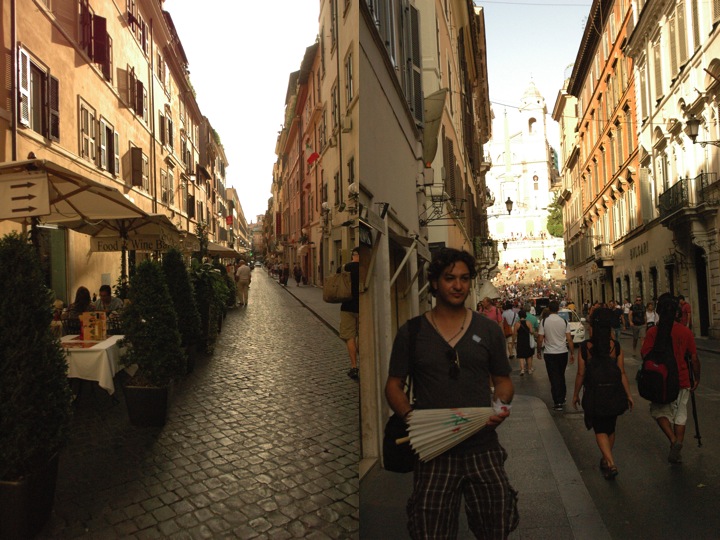 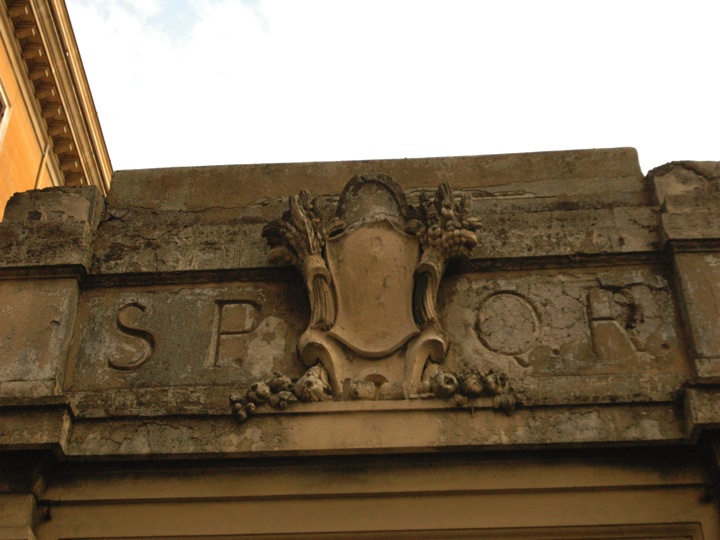 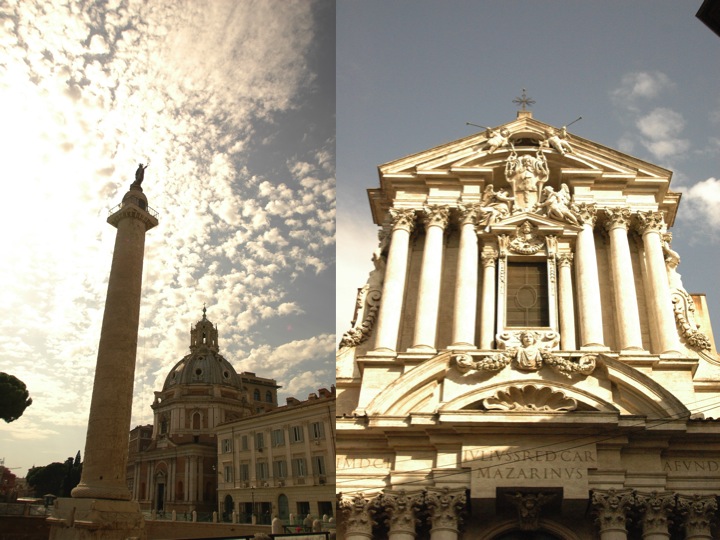 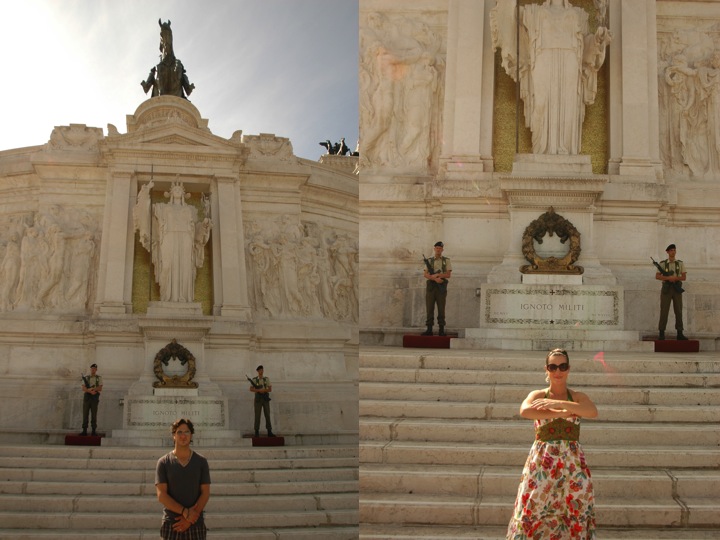 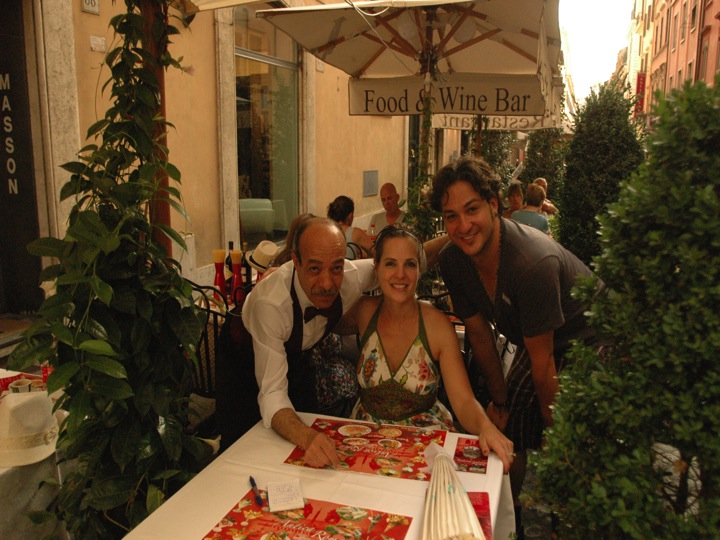 Rome is an amazing city.  We were surprised to see so many famous buildings sitting close together.  History, architecture, and sculpture lay intertwined with modern buildings, urban life, and business.   It felt like little grass shoots sprouting in the middle of the garden.  They were all just squished together.  From the train station we drove past the coliseum, a pyramid tomb, the Vatican, and the ruins. It was only a 15-minute drive!  I thought it would be all spread out.The second day we were there, after our visit to the Pope, we went with our friend Lucas to a “typical” Roman Meal.  Lucas knows Jonathan’s dad and opened up his home for us to stay with his family.  They are a beautiful family full of warmth and love.  It was great to get to know them.  We sat down for this “typical” Roman meal not knowing what to expect.  As the food and wine came out our faces lit up.  Wooden vessels of all our favorite foods spread across the table.  Olives, sun dried tomatoes, salami, and spicy cured meats, fresh prosciutto, rustic bread, fresh mozzarella cheese, sliced roasted pork, and other delicacies were presented.  It was a feast!  It has been noted by each of us as the highlight of the trip {even though we saw the Pope earlier that day}.  By the way you are each vicariously blessed by the Pope since his blessing extended to our relatives and friends.Lucas’ son, Paulo stayed with Jon’s dad over the summer and we got to know him well.  He is now our brother.  He was our tour guide for a day and showed us all of the great places in Rome.  The sun was scorching hot so we purchased some parasols.  What a great time! The new building that was created in the old roman style is called “the Vittorio Emanuele” monument. It is the first and second photos.  It was grandiose in size. We had to take photos with the guards just for fun.  You will see it in the movie “Under the Tuscan Sun” starring Diane Lane.

The Coliseum was eerie. To know how many people and animals had died there was overwhelming. We toured it with a guide which helped us with the behind the scenes explanations. It turns out that back in the day it was significantly taller and covered in beautiful white plaster and marble. Those elements have been removed or decayed. What remains is a skeleton of what was there. We saw a cross that had been scratched into the stone coliseum wall. So much of history crossed paths in Rome!

Apparently there were 4 levels with the socialites at base level, the wealthy businessmen sitting next, the common man above him, and the women in the nose-bleeders.  I am so glad I don’t live in that time!  I would have some words for them!  It was a place of free food and entertainment for the people to come.  It was believed that whoever provided free food and entertainment gained loyalty and submission of the people.  So in reality it was a place to show off power, and give subliminal and not so subliminal messages.  Perhaps like our TV sets.

We stopped at the famous Trevi fountain.  It can be seen in the “Roman Holiday” film starring Audrey Hepburn. I had never seen the film so you can bet I watched it at my first possible moment – which happened to be playing on the plane on the way home.

There is a tradition that if you throw a coin into the fountain you will be ensured a return to Rome. We happily tossed the coins in. Then a bystander told us to do it backwards over our left shoulder – so we redid it.  Now we are covered for our next trip to Rome!

A dream of mine is to have a cappuccino in Italy.  I made this come true several times on my trip.  One time was here in Rome.  We had an adorable waiter who you see in the photo with us.  I got tired of the entire site seeing so we stopped for a bit.   What a great time.  It was the perfect relaxation.  Do you have a favorite spot for a cappuccino?

Check back next week to see what our favorite roman churches were.

We believe design begins with a relationship of trust with your wedding planner and event designer. When choosing an event designer or a wedding coordinator, we believe that you should feel listened to, understood, and guided through the process in a way, which helps you achieve a look and feel that is personalized to your style. There should be a connection with the designer’s work, esthetic, and a comfort-ability with the professionalism of the company they represent. Mutual respect between the client and the wedding coordinator or event designer is the foundation to a successfully designed event. We believe it is the client who holds all the secrets to their design – what they like, what excites them, and the message and experience they desire to convey throughout their event.
View all posts by Asiel Design →
This entry was posted in Travel and tagged italy. Bookmark the permalink.