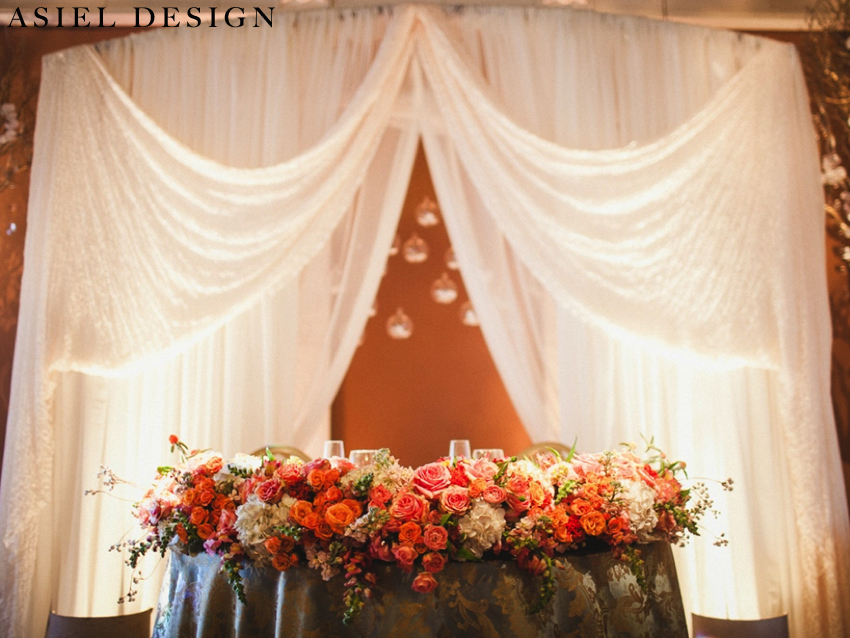 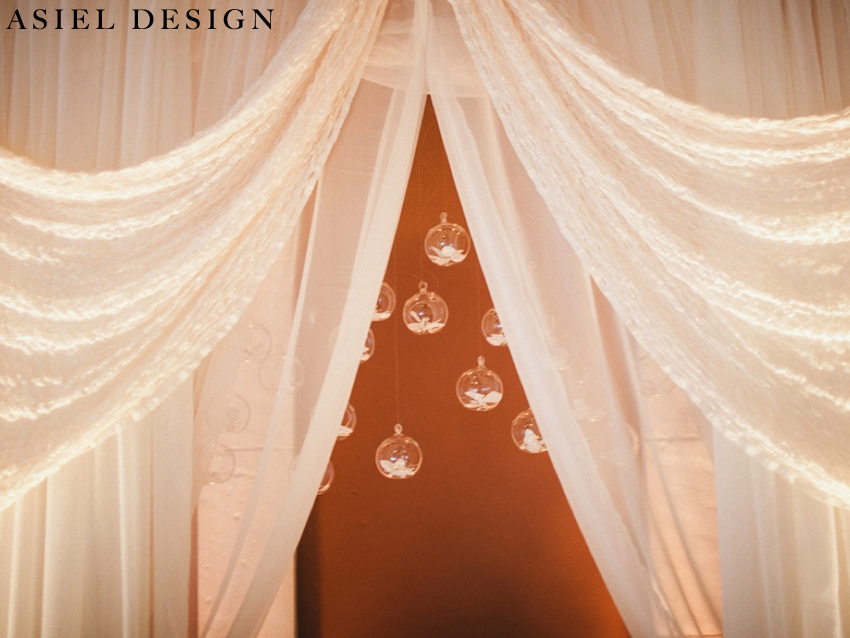 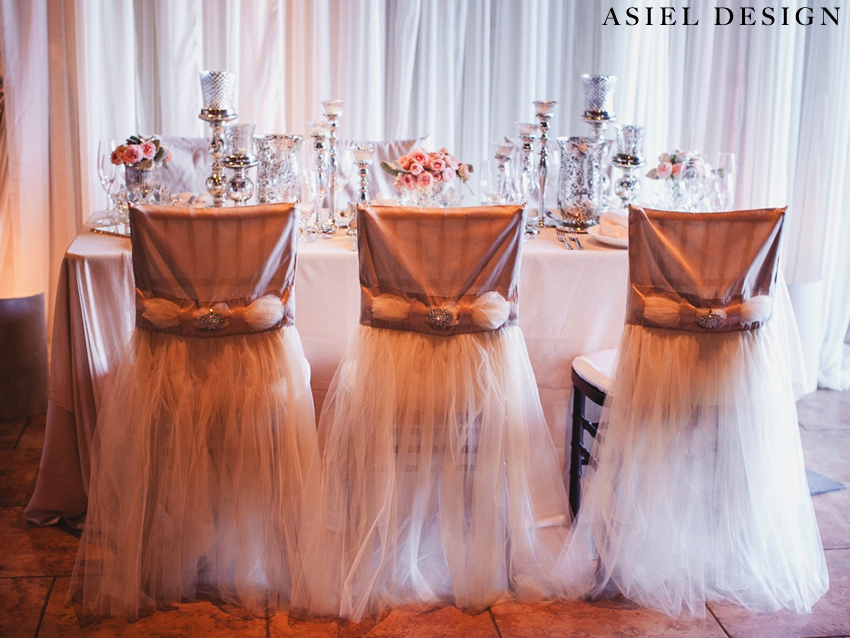 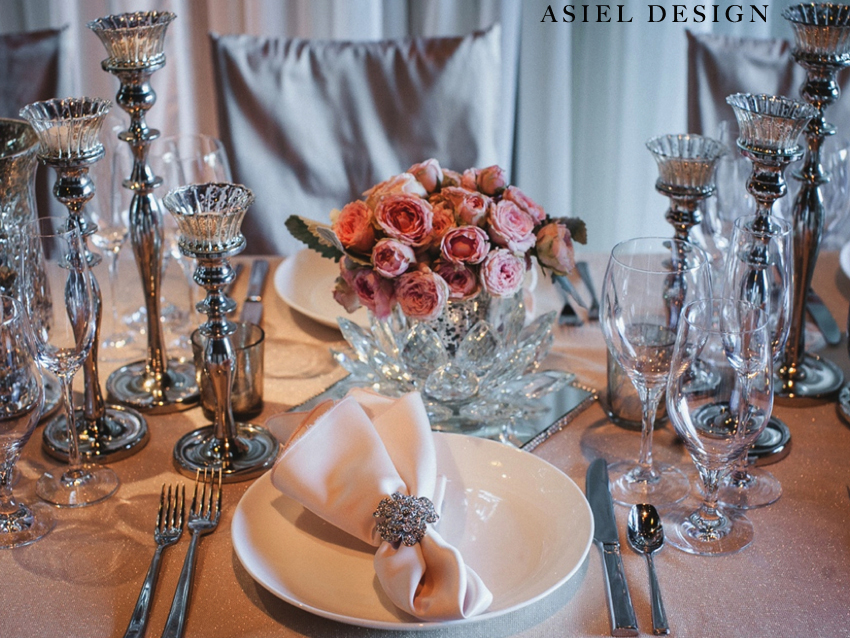 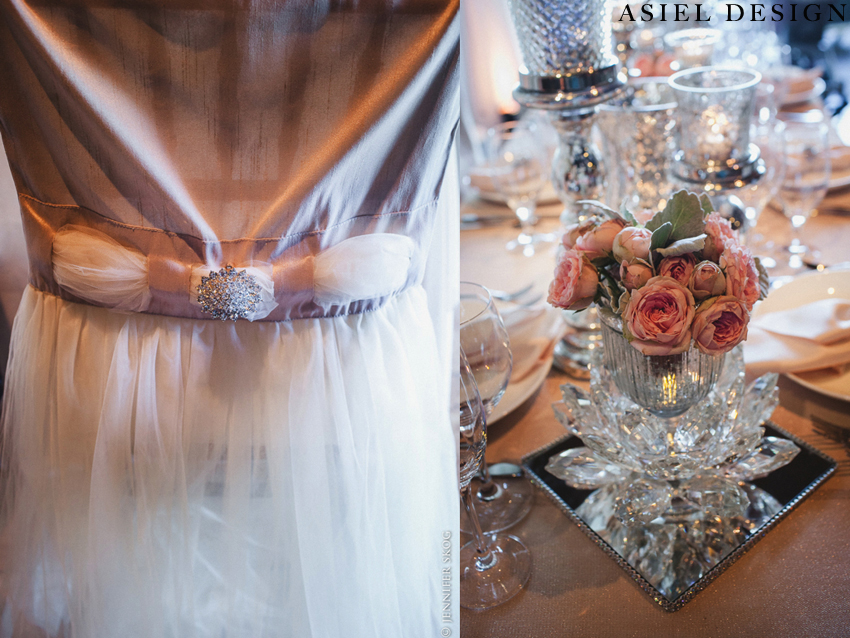 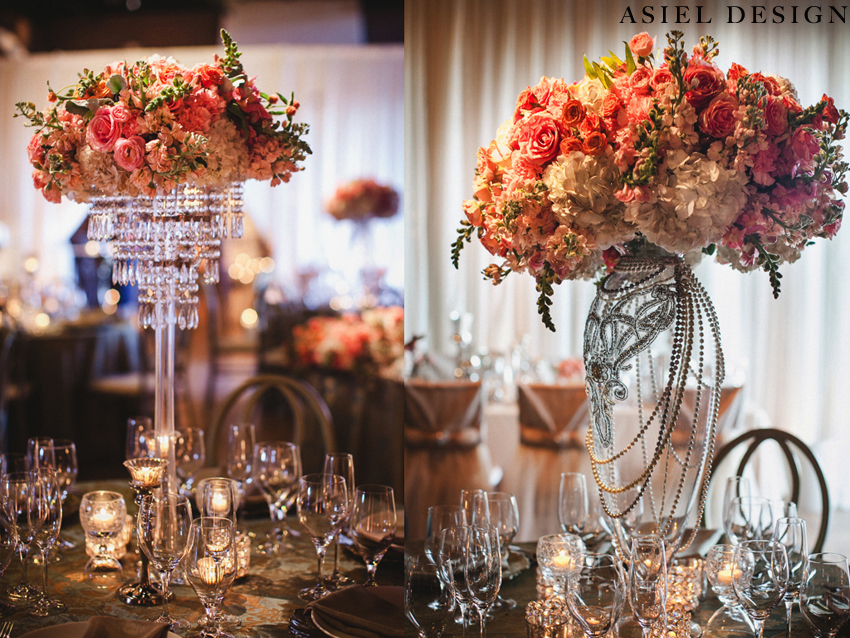 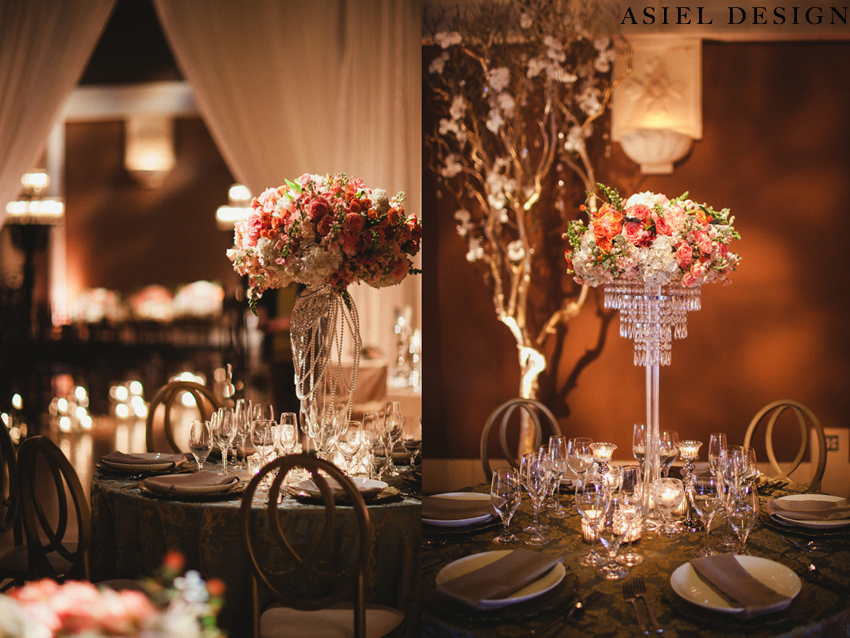 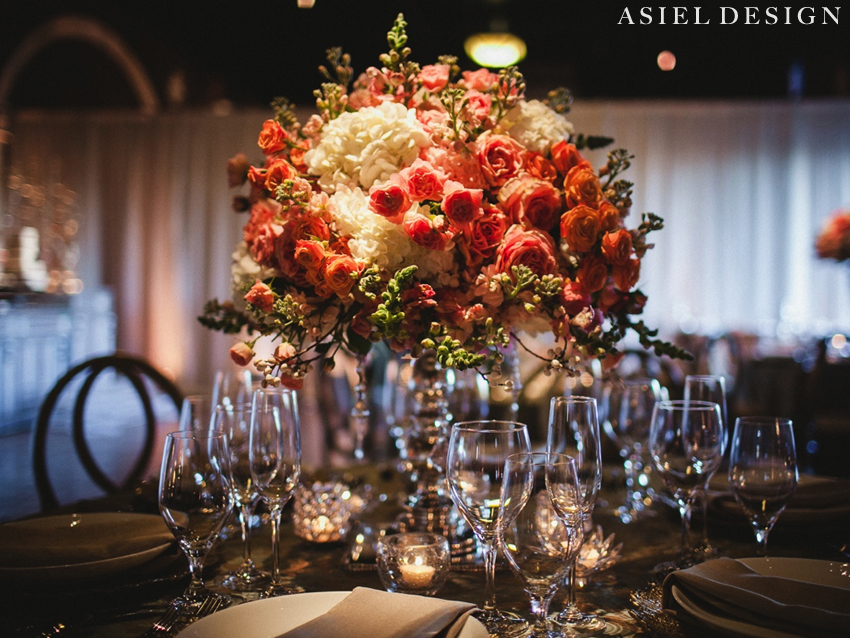 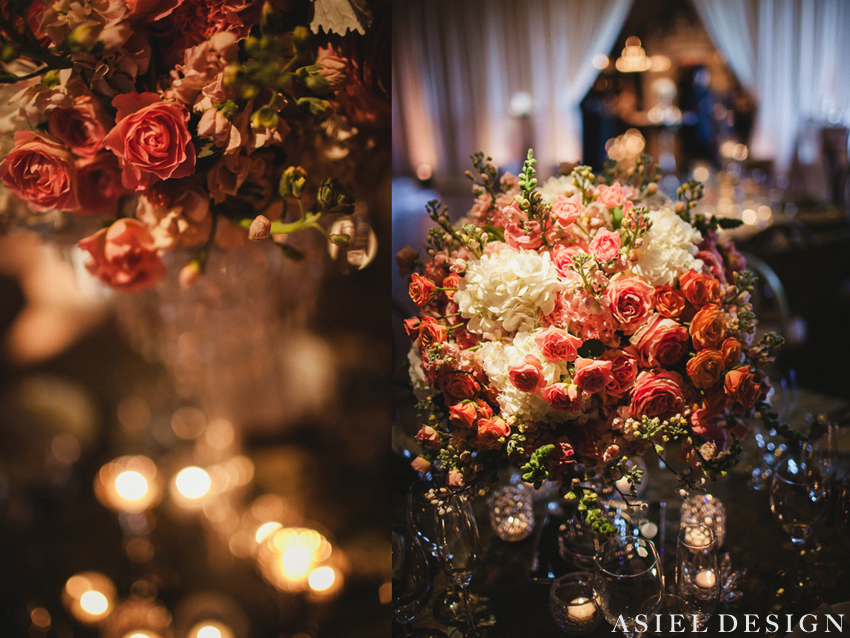 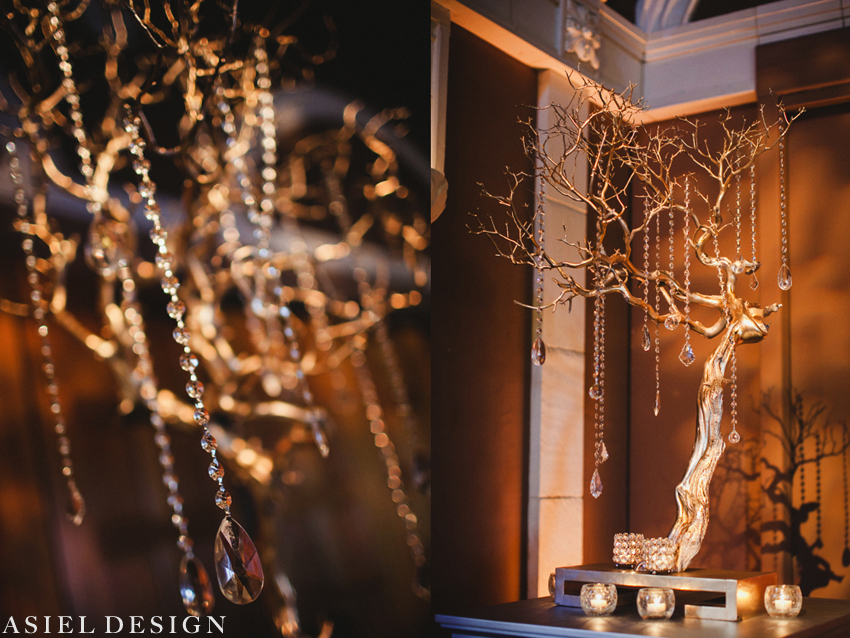 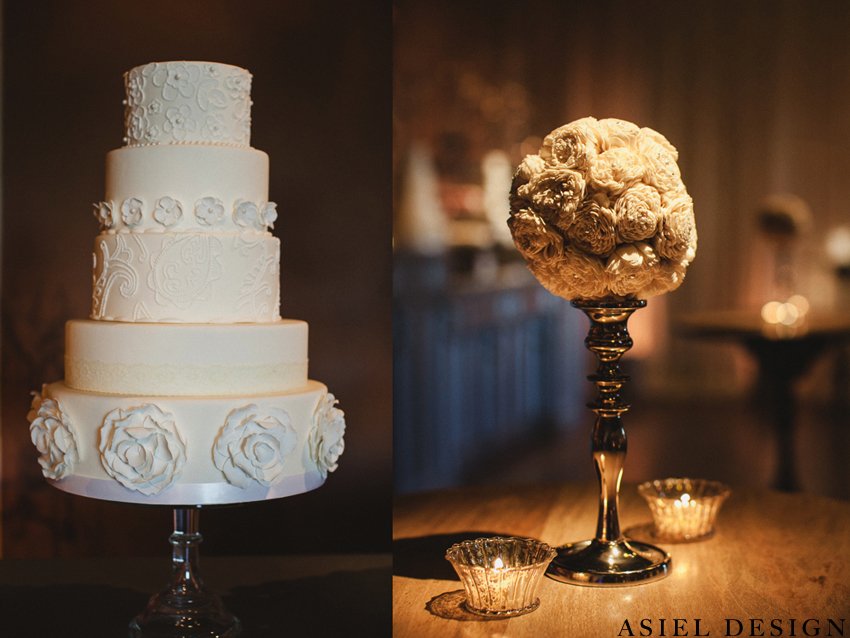 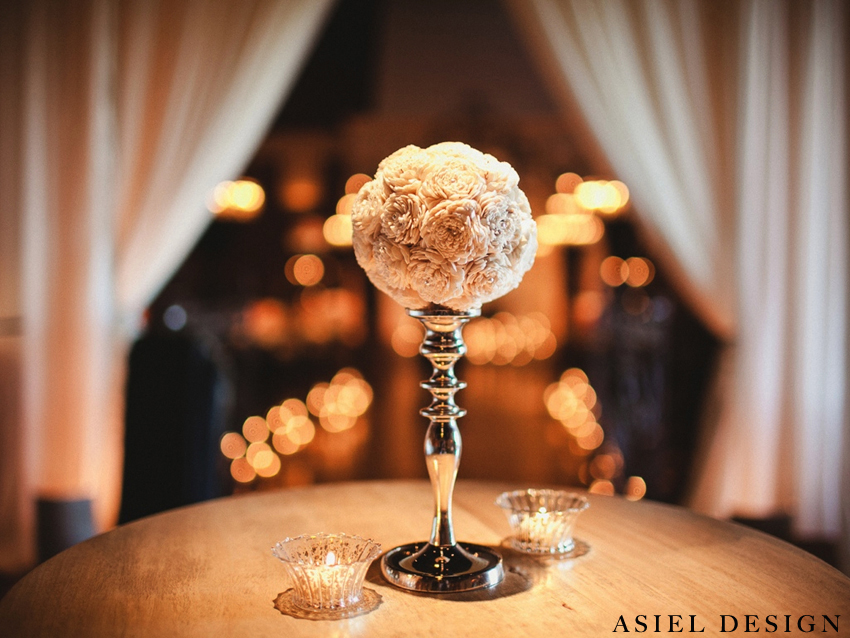 Casa Amore is an event put on by the Casa Real and Palm Event Center. Each year these two venues ask their most trusted wedding professionals to come in and display their services for their brides and grooms.

Last week I blogged about the ceremony vignette that we did at Casa Amore and this week I am blogging about the reception vignette. To fully understand what I am talking about here it may be helpful to read last weeks post.

As Linnae and I approached the design for this event we wanted to make a ceremony and reception design that went “hand in hand,” together. The plan was to design these two vignettes in a way that we could “repurpose” the isle décor at the ceremony into the centerpieces at the reception. The idea of repurposing centerpieces is something that we have been doing for quite some time now. It saves clients money and it is also a little more conscientious to the environment. In an actual event, repurposing centerpieces has to be thought out ahead of time. Both in the design and in the time frame to move them from one location to another with out guest seeing the transfer of the flowers.

The interesting thing about these two vignettes was that even though the flowers in both locations were the same color and design, the aesthetic of the two areas differed. The ceremony had a rustic and Mediterranean look while the reception was feminine and glamorous. Again the same floral designs were used in both locations but it was the design element that accompanied the flowers that gave it such a different feeling. (i.e. vases, candelabras, linens, chairs etc..)

So what did we do for the reception? Well to begin with, we used some of our most popular centerpieces. We used our Chandelier Stand, which used the same floral design that was used up the isle in the ceremony area. We also used our “Glamour Vase” which was the same sized floral as the large ceremony arrangements. In addition we brought out a lot of new mercury vessels and candle pedestals that we think are going to be a huge hit for 2013.

As a backdrop for the sweat heart table we created a custom fabric backdrop adorned with hanging glass globes. This backdrop was flanked by two 12’ oversized mercury colored Manzanita trees. These trees are great statement pieces to put through an event.

Wildflower Linens did the fabulous linens and chair covers. Jen’s Cakes kept everybody happy by passing out her cupcakes. Enhanced Lighting did a great job with the ambient lighting and Blueprint Studios brought out modern and sensible lounge furniture and chairs.

At the end of the night the Casa Real people told me that the Amber Room that we were placed in was the busiest they had ever had it during one of these events. The mood and vibe was just right. Everybody pulled together and created a fantastic event and very romantic setting.

We believe design begins with a relationship of trust with your wedding planner and event designer. When choosing an event designer or a wedding coordinator, we believe that you should feel listened to, understood, and guided through the process in a way, which helps you achieve a look and feel that is personalized to your style. There should be a connection with the designer’s work, esthetic, and a comfort-ability with the professionalism of the company they represent. Mutual respect between the client and the wedding coordinator or event designer is the foundation to a successfully designed event. We believe it is the client who holds all the secrets to their design – what they like, what excites them, and the message and experience they desire to convey throughout their event.
View all posts by Asiel Design →
This entry was posted in Ballroom, Casa Real, Cream, Event Design Clients, Feminine, Glam, Mercury, Opulent, Orange, Peach, Pink, Winery Wedding and tagged ballroom wedding, candle light wedding, Candlelight, Casa amore, Casa Real, Casa real wedding, Cream floral design, cream wedding, Enhanced lighting, feminine wedding, Glam reception, glam wedding, Glam wedding design, Glamorous reception, glamorous wedding, Glamorous wedding design, Jennifer skog photography, Jens cake, Orange floral design, orange wedding, Palm event center, Palm event center events, Palm event center wedding, Peach floral design, peach wedding, pink wedding, Pretty wedding design, Reception Casa real, Reception palm event center. Bookmark the permalink.