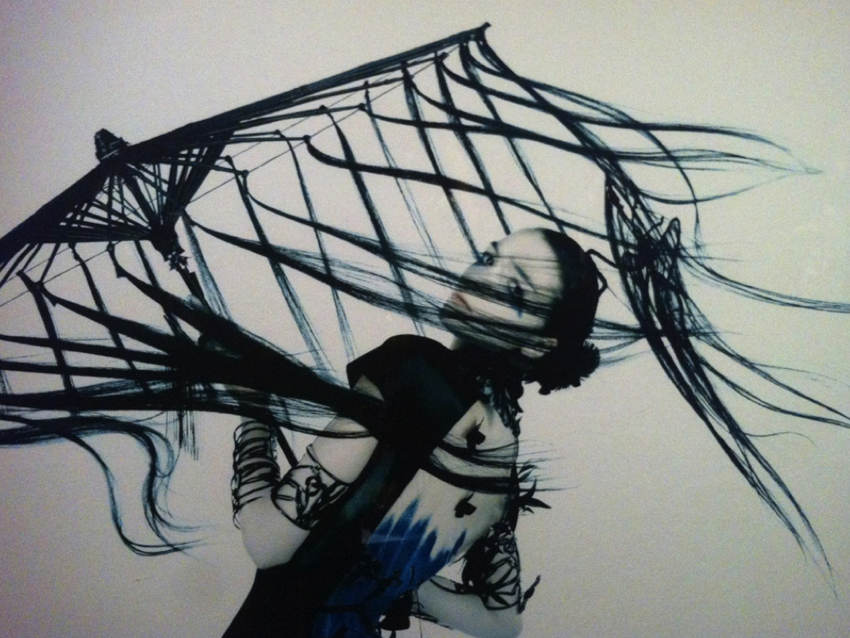 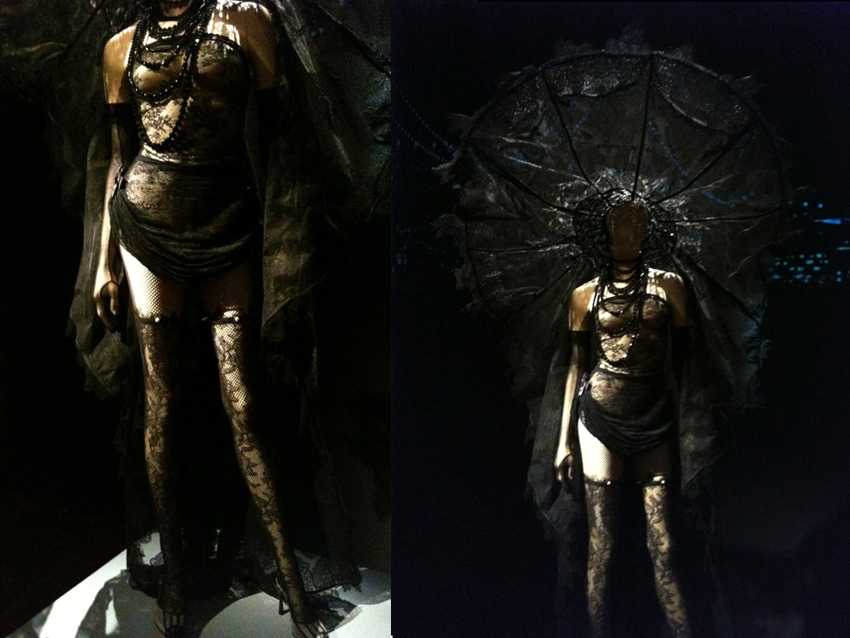 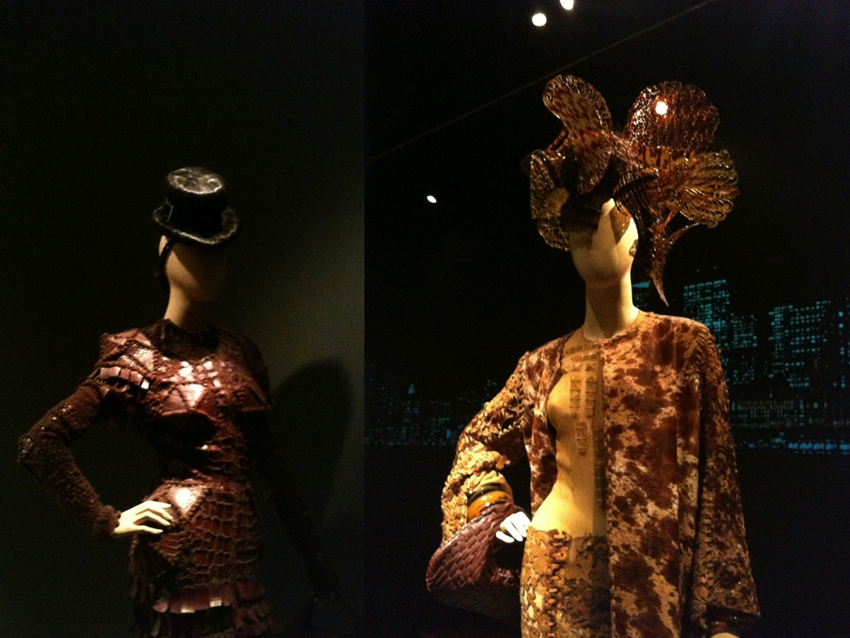 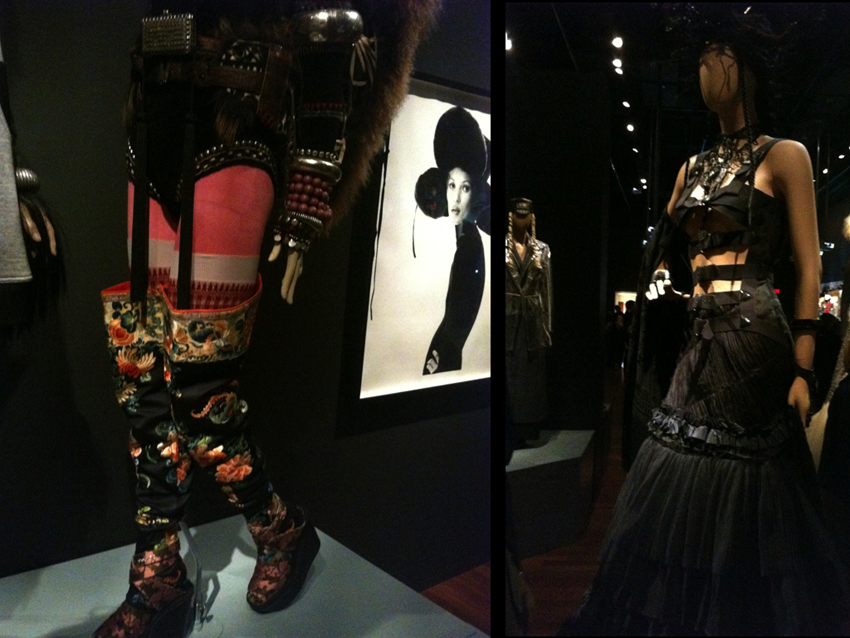 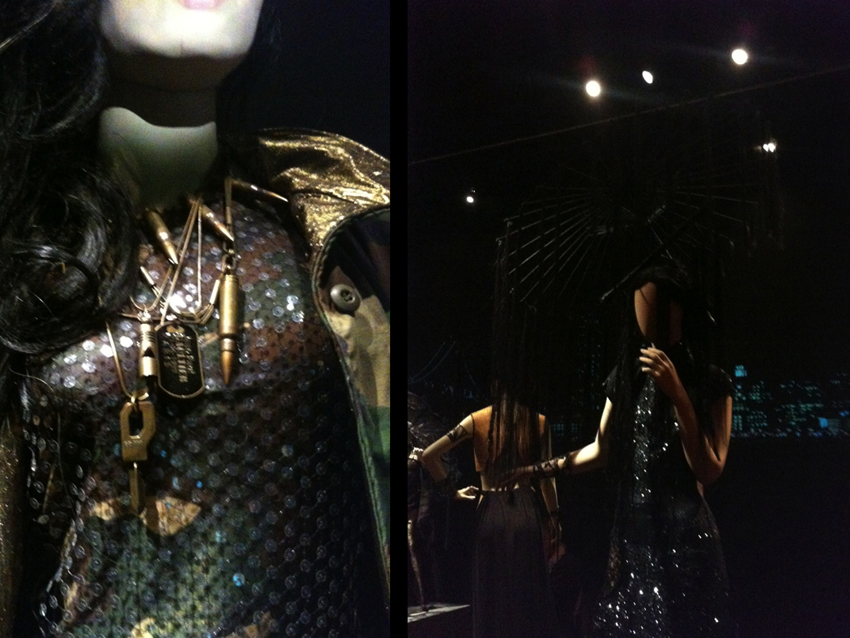 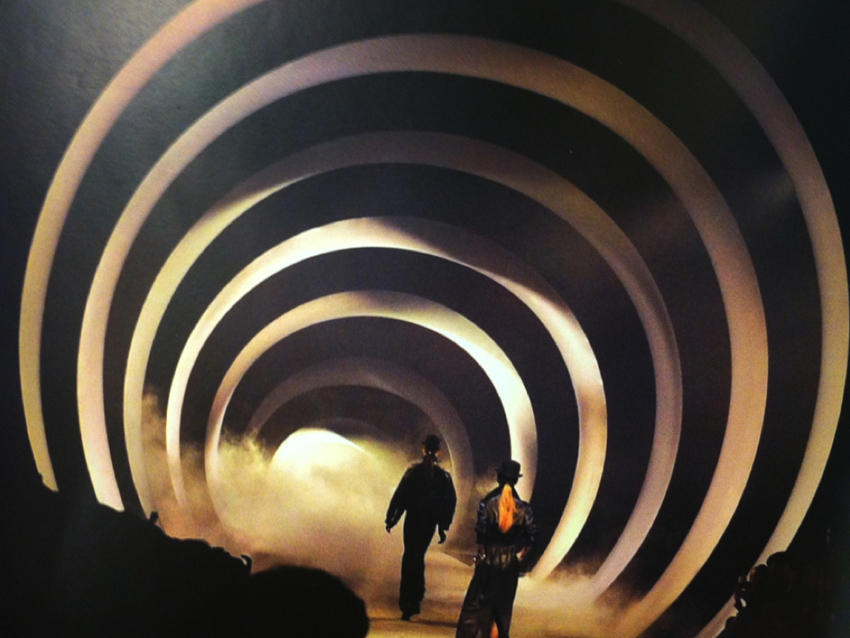 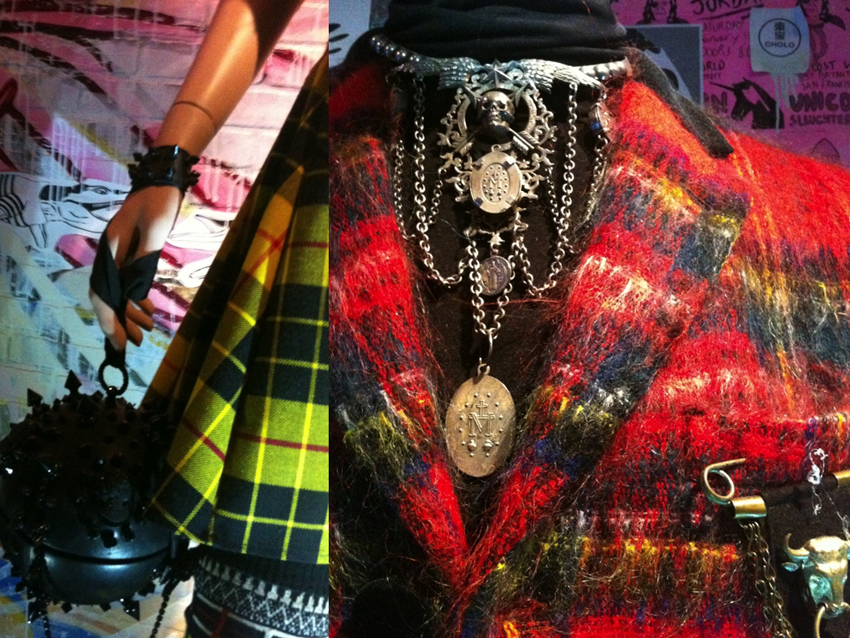 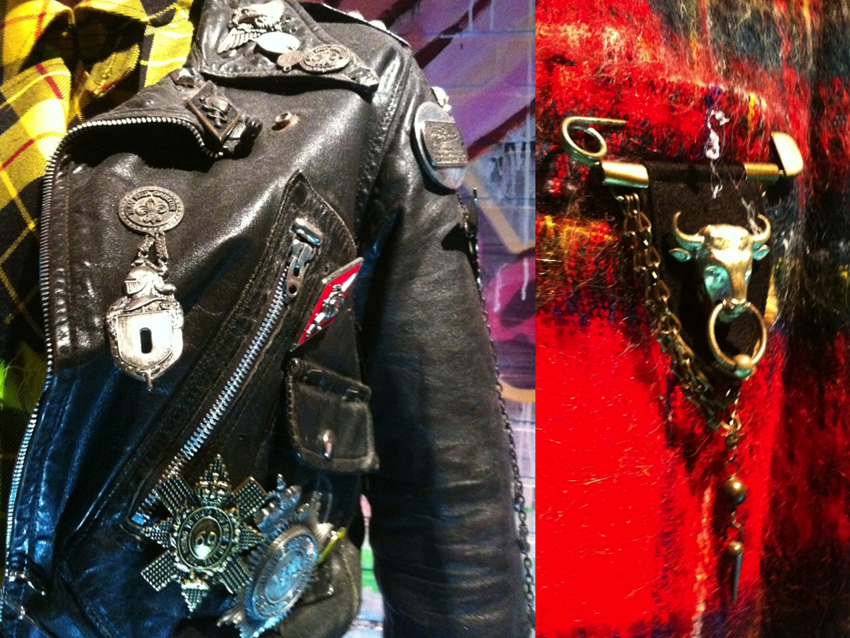 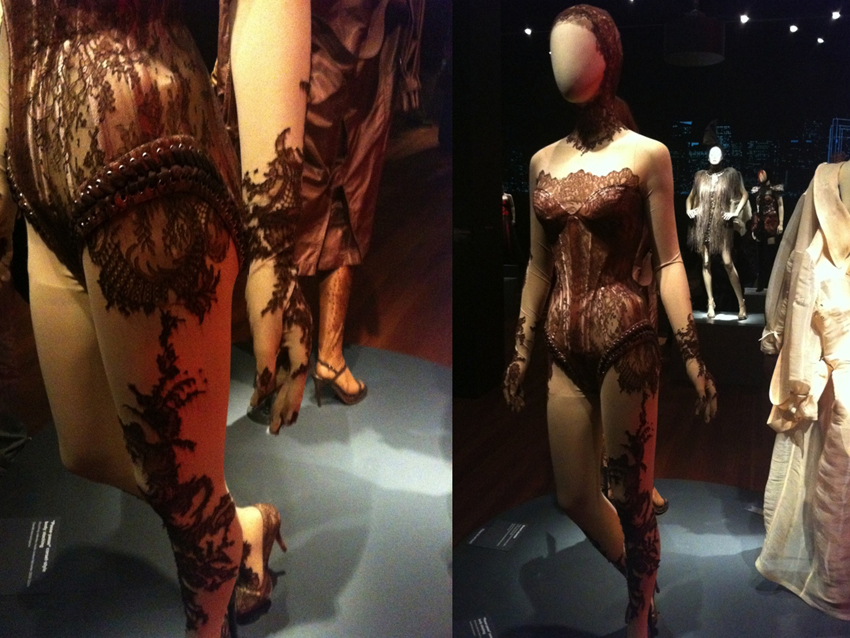 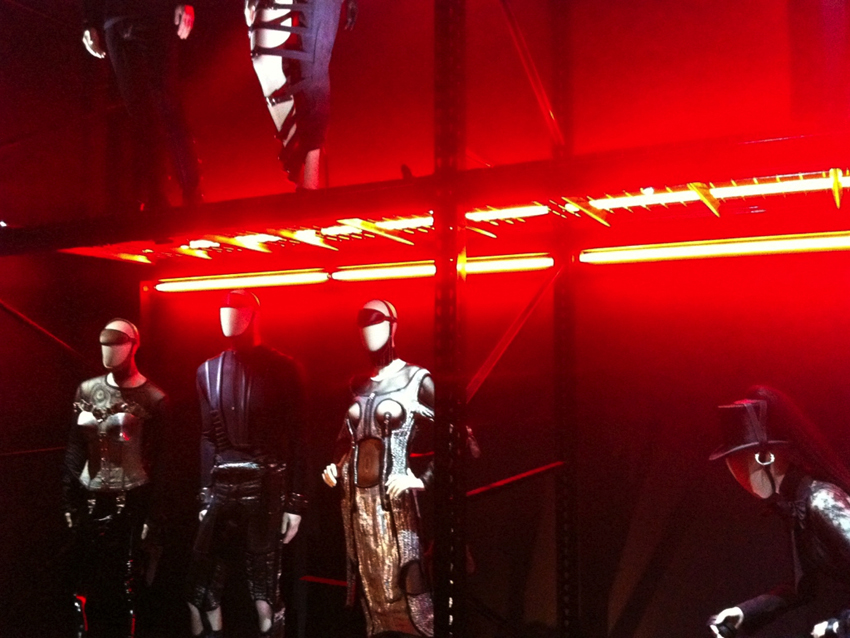 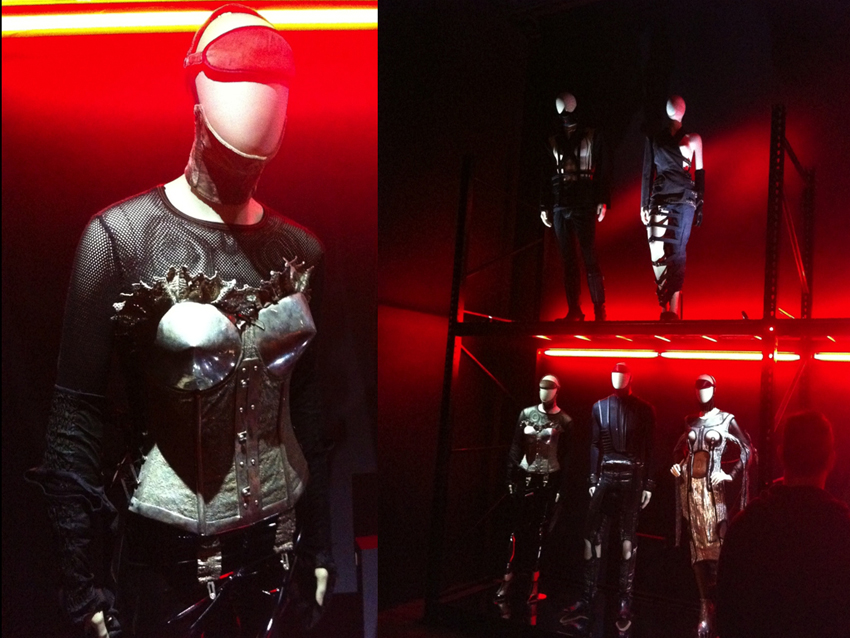 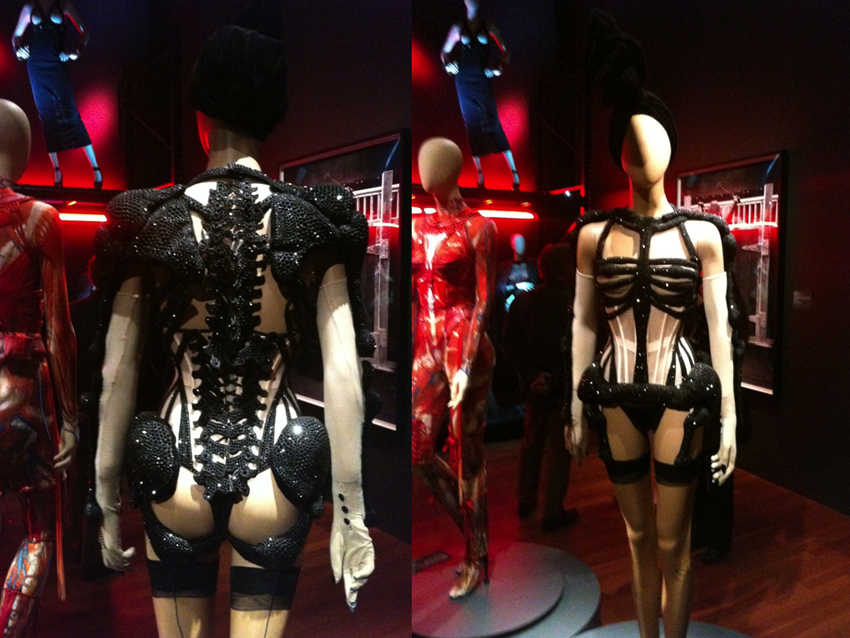 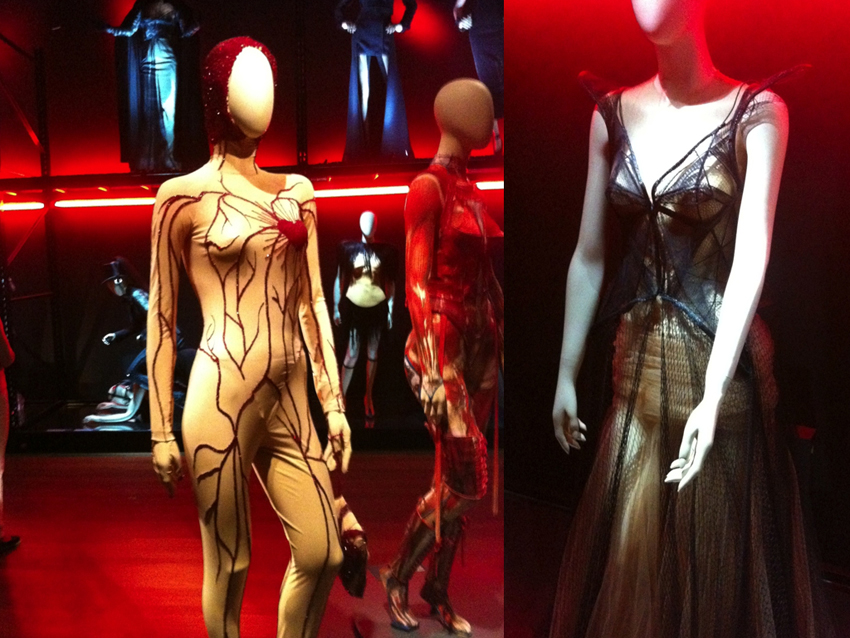 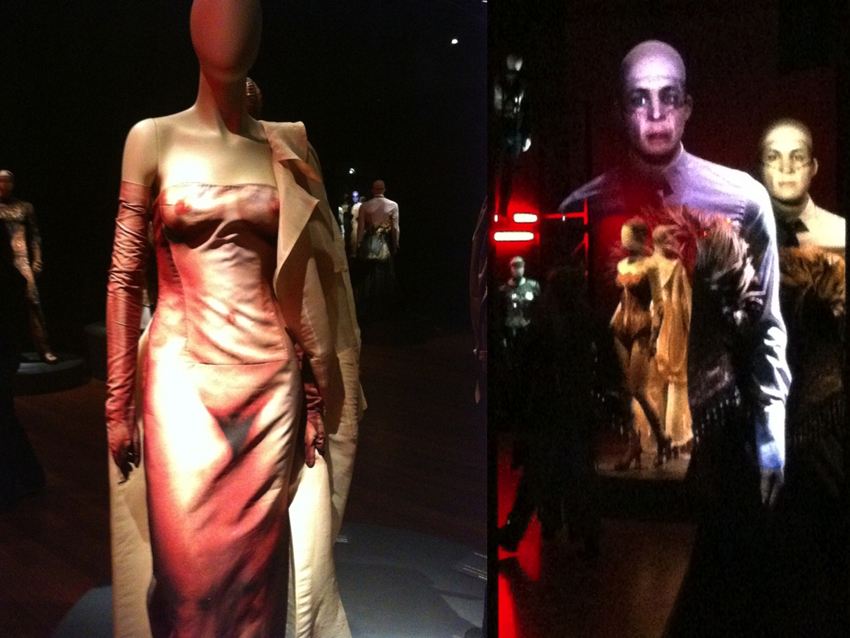 Warning! Some of the images may be inappropriate for some. But then again this display was at the De Young so how bad could it be? By any measure, this is my second blog posting on the Jean Paul Gaultier exhibit that was showcased at the De Young last year. If you missed last week’s blog you should check it out.

Also as I mentioned last week the images this week got a little more progressive. We start to see more gothic, punk and even some sadomasochism elements. The exhibit felt more like an event then a fashion or art showcase. The vibe and the ambience was dark and moody, pin spotting only the fashion on the mannequins.

I learned that Jean Paul had a great love for the punk scene in London. Jean Paul loved the fashion on the streets and brought that rock n’ roll punk to the runway. Vibrant and distressed fabrics, Mohawks and chrome skulls can all be seen in his punk inspired collections. We even see some Scottish plaid incorporated into some of these looks. Yes, before Ed Hardy became wildly popular after the turn of the millennium Jean Paul was rocking out this punk look.

We even see his usage of military assembles well before they were popularized into everyday fashion. I guess that’s what I appreciate about some fashion designers. That they can see into the future. They look forward to what “is” and what “will be” not “what was.” I feel like the event industry could use a little of that. So often we look at what was done and not what “is to be done.” I guess that’s also a passion of mine, to be able to look into the future to see what trends have not been explored yet so that we may offer something different to our clients. This is the reason that we brought trends like gothic and steam punk into the event world. Because it wasn’t really being done by anyone else on a sizeable scale.

But now it is time back to the exhibit. I’m sure you noticed the black and red S&M looking display. This area was laid out ingeniously. The multi level risers with the red lights are nothing more than pallet racks (or shelving) that industrial warehouses would use to store items. The show curators painted these racks black and added red lights to make a display. I loved the resourcefulness that they used to take an item like pallet racks and to be able to have the ingenuity to repurpose them.

It was also in this area that I found my favorite part of the exhibit. (And no, it was not the leather lingerie) It was a mannequin of Jean Paul’s face using the video mapping technology talking to another image of Jean Paul in the mirror. Yes, it was a recreation of that proverbial “talk to ourselves in the mirror” that we may have with ourselves from time to time. (This “talk” is pictured above in the last slide on the right). The conversation was fascinating and I just stood there and listened as the more mature Jean Paul told the younger and timid Jean Paul to not be afraid but to “be yourself.’ He told himself who cares what others think about you. For instance, “If you want to wear a skirt then wear a skirt.” He told himself “Why be confined to the norms of society?” And who makes the norms? Of course, we do.

The older Jean Paul also reminds the younger that back in the renaissance era, men wore skirts and in some parts of the world they still do. Now this is not a crusade for men to wear skirts but the point is to be you. This all reminds me of this quote that I read the other day

“People may hate you for being different and not living by society’s standards, but deep down, the wish they had the courage to do the same”

This man in the mirror talk is reason enough to check out this exhibit and it is returning to the De Young Museum, March 24th-August 19th. Check out www.deyoung.famsf.org for more information.