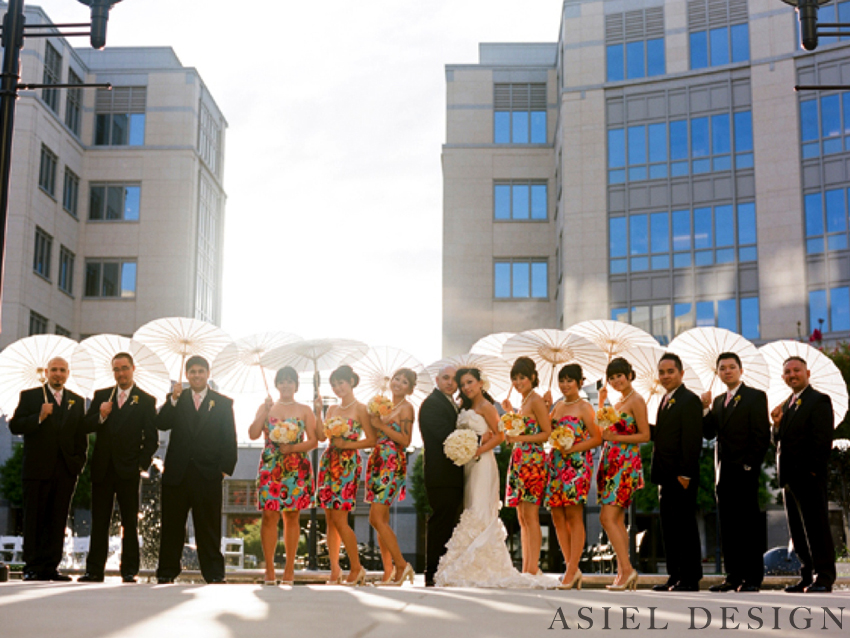 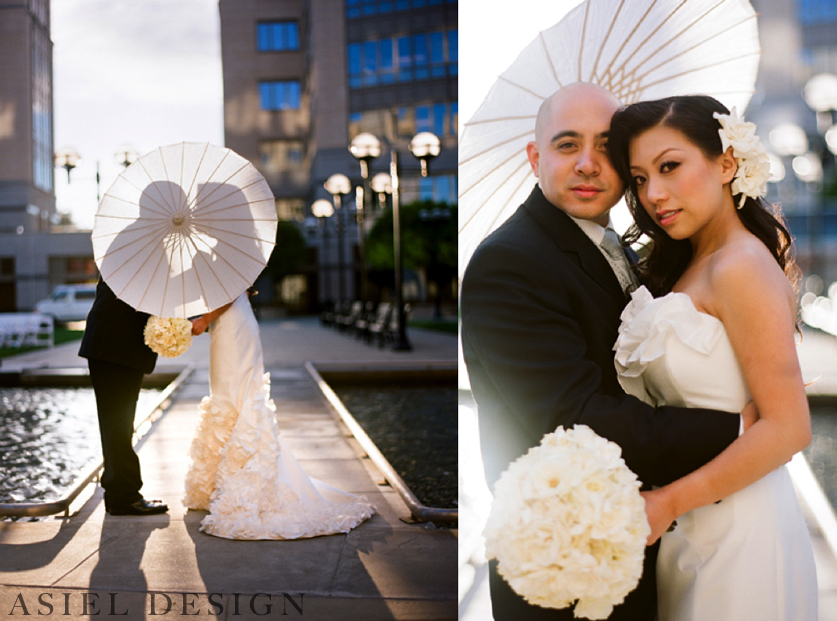 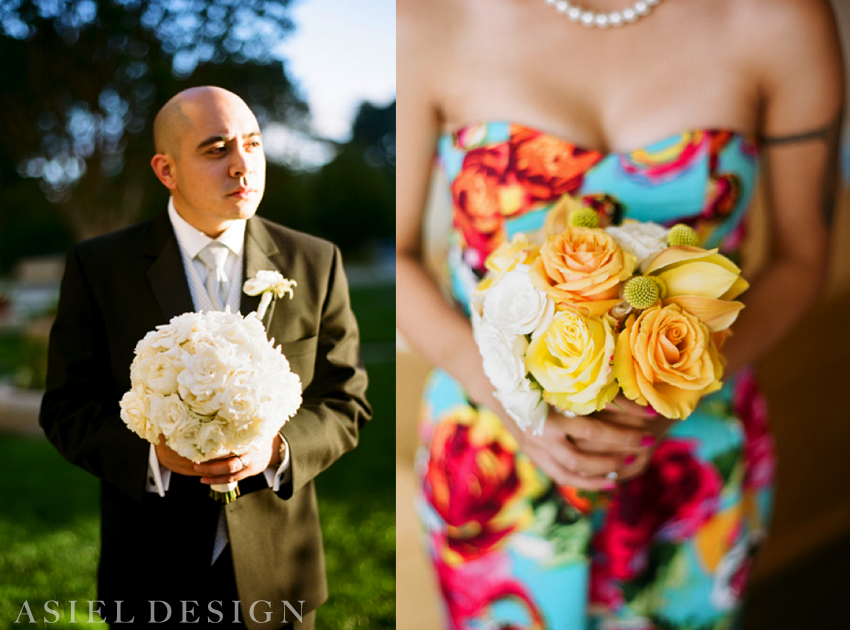 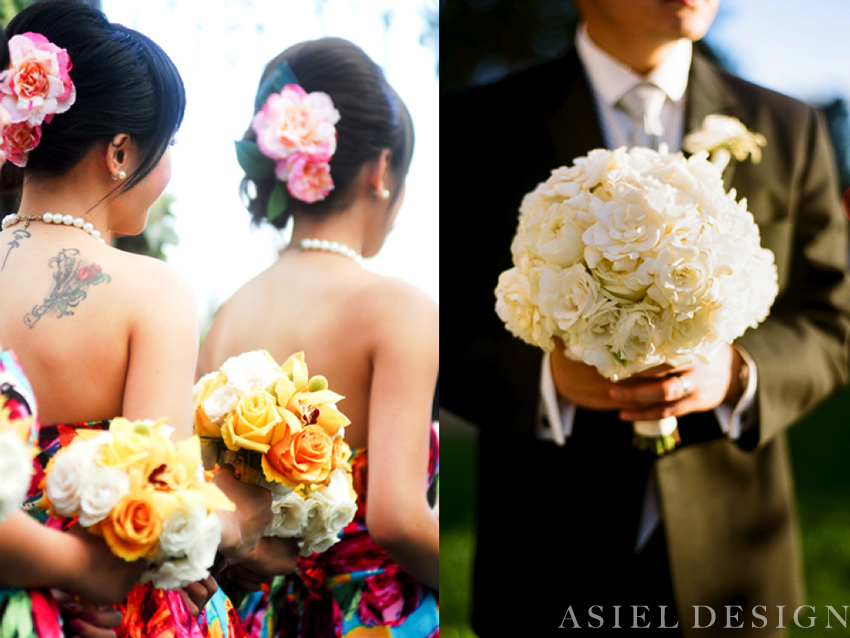 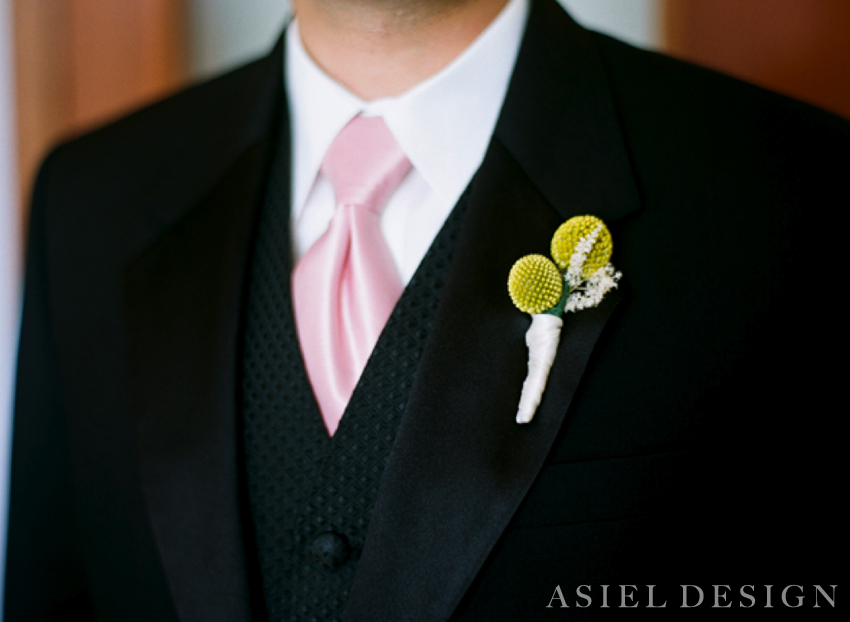 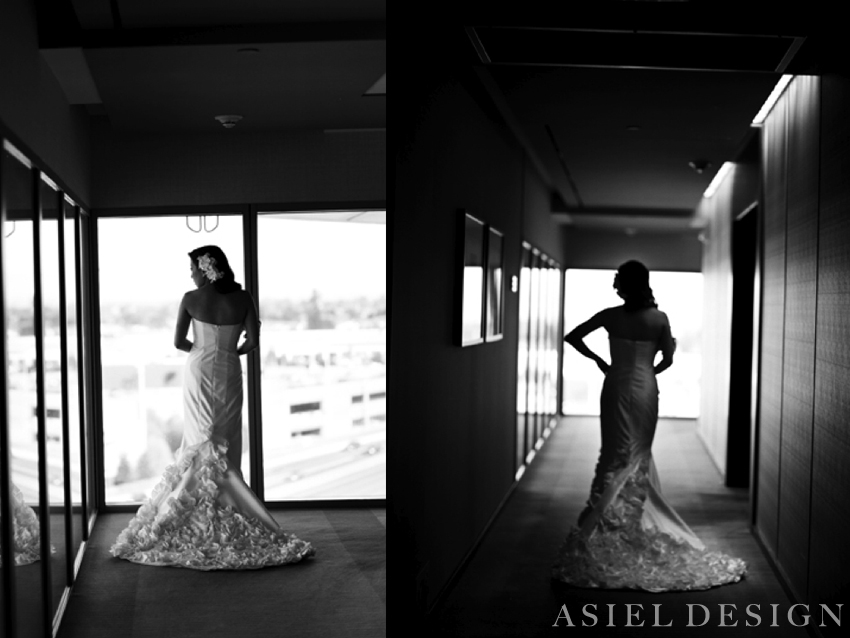 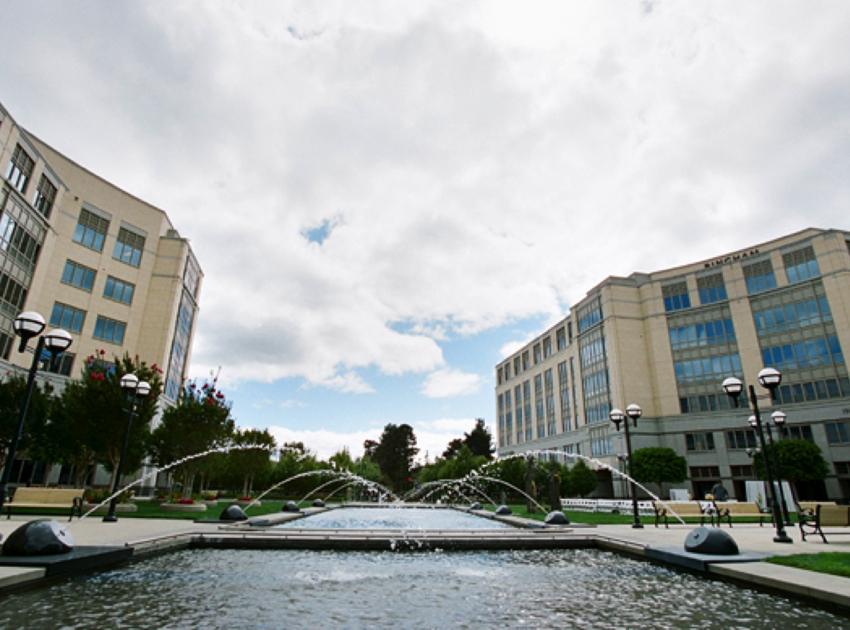 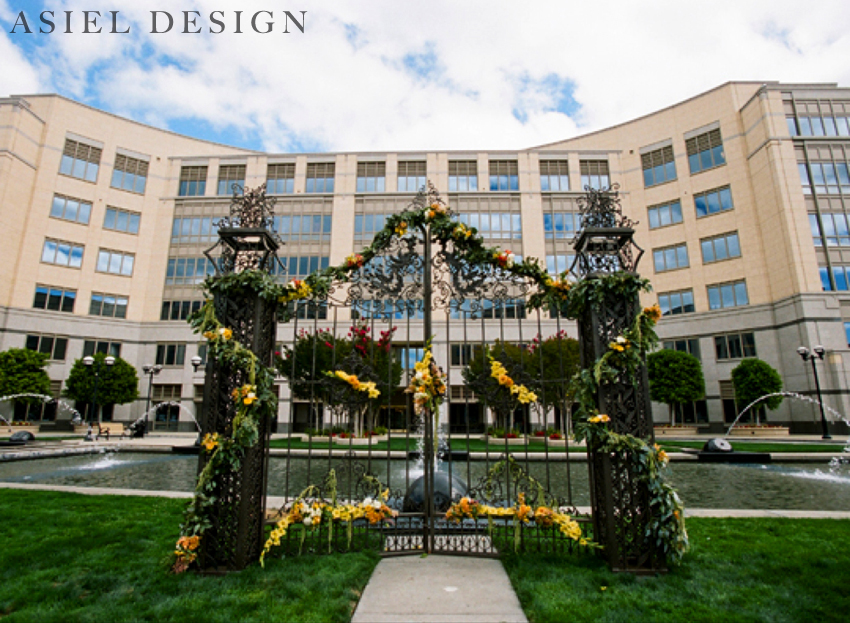 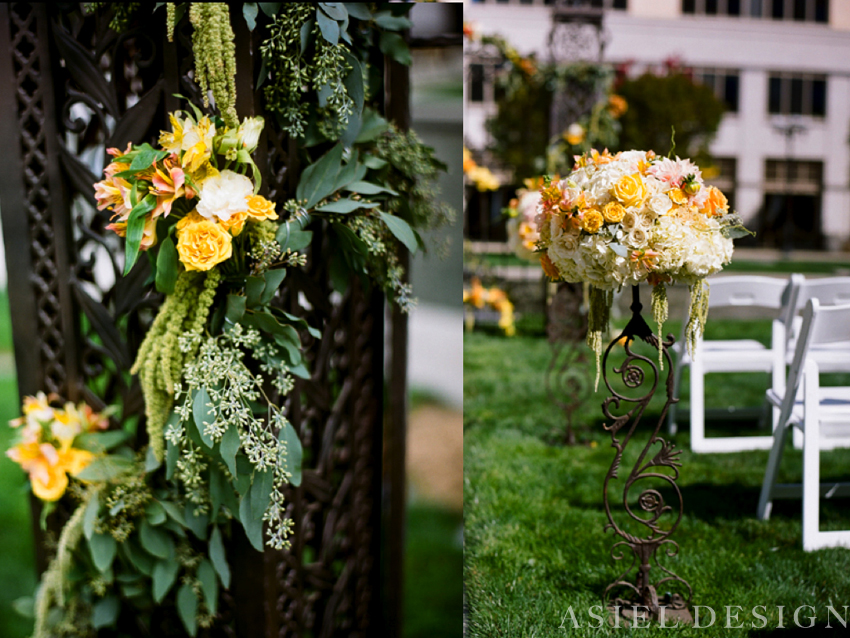 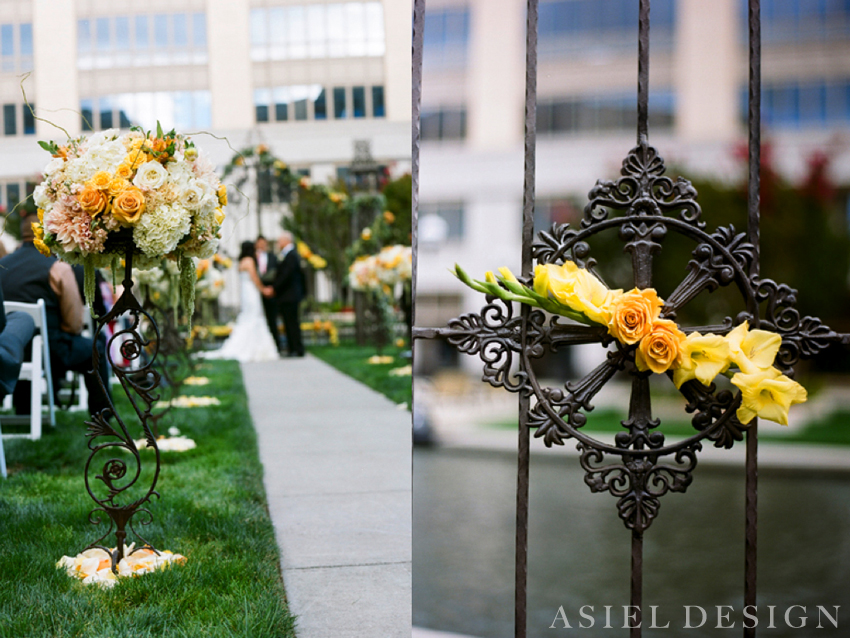 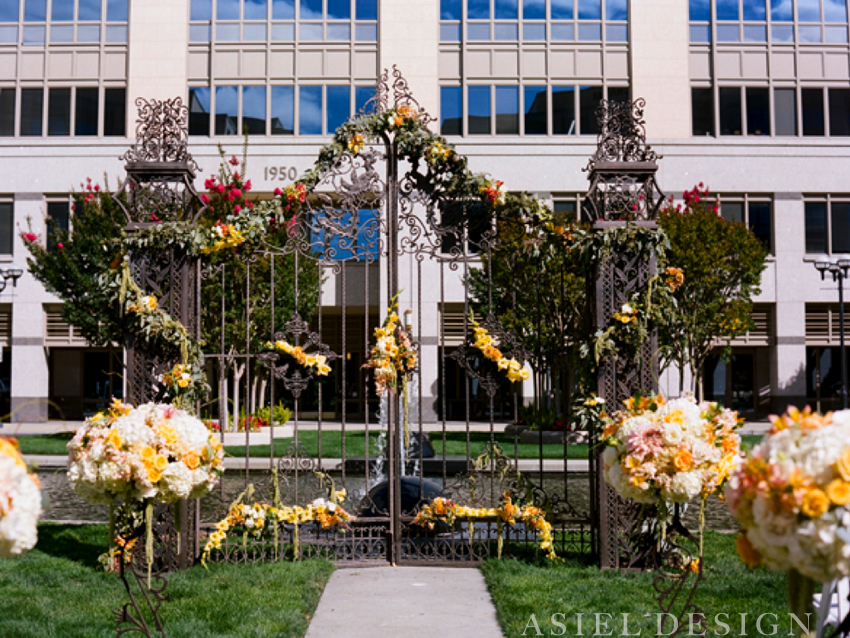 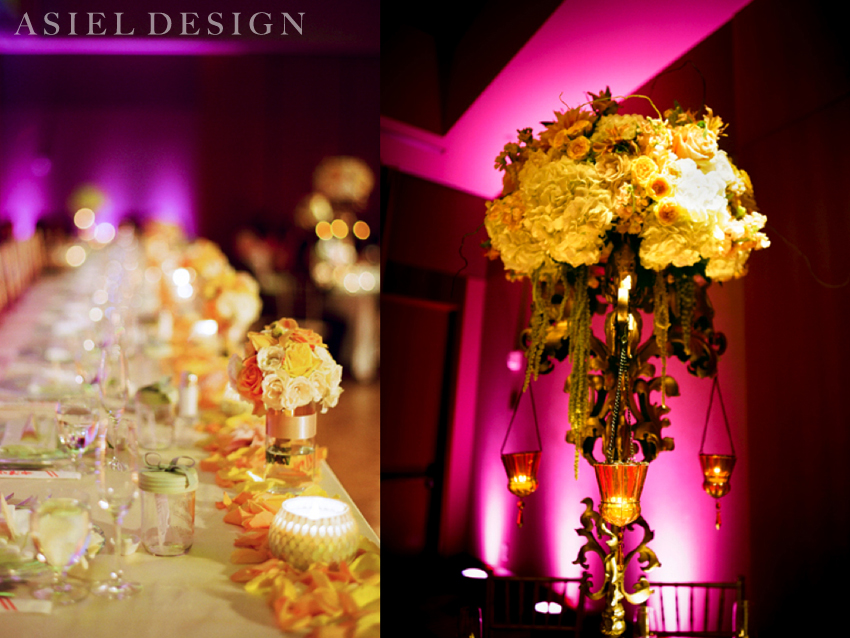 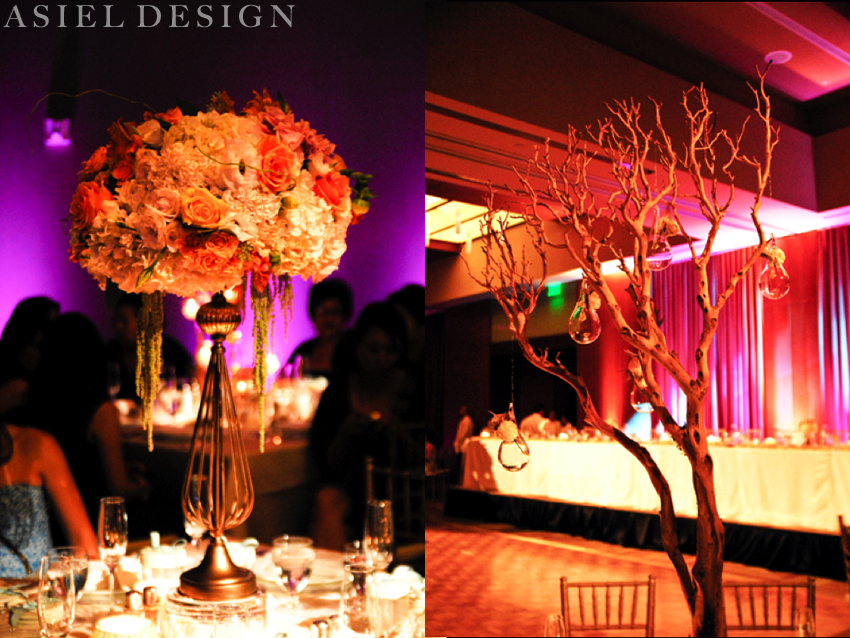 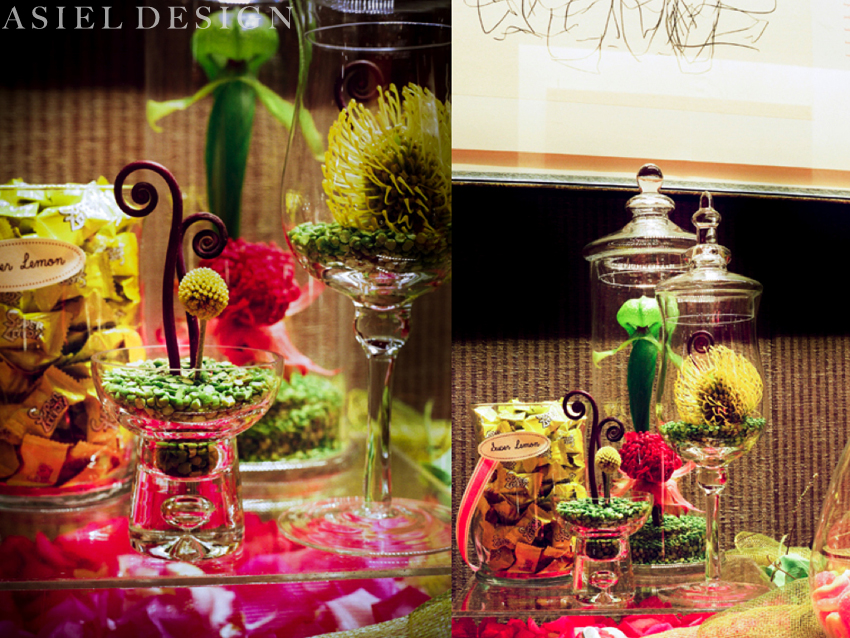 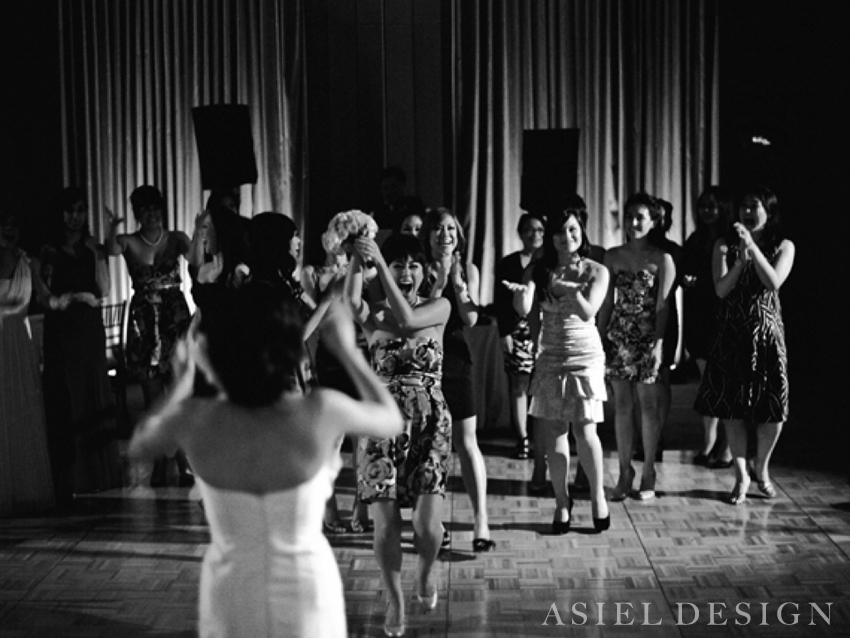 Yvonne and Christian had a stylish wedding at the Four Seasons located in Palo Alto, California. It was nice to see different design inspirations come together in an eclectic way. I like the pops of color that were chosen for the bridesmaid dresses. We echoed the funky usage of colors in the floral accents as well. It was nice to see the playfulness in the bridesmaid look.

From a design standpoint I got the most excited about using our oversized Estate Gates as a backdrop to the ceremony. One could easily imagine using these gates in an old world themed wedding. But it was a nice change of pace, using them set in the middle of the Four Season’s modern front lawn, which was surrounded by the architecture of the Silicon Valley. We also lined the isles with our cast iron stands that were embellished with medium sized floral arrangements. These arrangements would later become centerpieces for the reception.

As far as the reception goes we used three different styles of centerpieces to give the reception some depth. Having different styles of centerpieces also gives the guests a few different options of centerpieces to look at. The first style we used was a large floral set on top of our ornate Lion Stand. This centerpiece was the most dramatic and my favorite of the three styles. The second style was a lot like the first style, (in that they both were large floral arrangements set on top of iron stands). The only difference here was that Yvonne opted to have us use candelabras that she provided. Finally, the third style was made up of sandblasted Manzanita branches, which held teardrop shaped hanging glass vases. Out of the three styles this style was the most different. The third style was still dramatic, but the sculptural qualities of the branch offset the fullness of the large florals that was seen in the other styles.

Everything came together to create a cohesive look that embodied Yvonne and Christian’s style. When this couple’s guest arrived at their wedding they knew it was Yvonne’s and Christian’s wedding… because their fingerprints were all over it.

We believe design begins with a relationship of trust with your wedding planner and event designer. When choosing an event designer or a wedding coordinator, we believe that you should feel listened to, understood, and guided through the process in a way, which helps you achieve a look and feel that is personalized to your style. There should be a connection with the designer’s work, esthetic, and a comfort-ability with the professionalism of the company they represent. Mutual respect between the client and the wedding coordinator or event designer is the foundation to a successfully designed event. We believe it is the client who holds all the secrets to their design – what they like, what excites them, and the message and experience they desire to convey throughout their event.
View all posts by Asiel Design →
This entry was posted in Four Seasons Silicon Valley, Indie Weddings, Orange, Outdoor, Playful, Sculptural, White, Yellow and tagged Four seasons hotel, Four seasons Palo alto, Outdoor wedding, Punk wedding, Silicon valley, Silicon valley four seasons, Tanja lippert, Tanja lippert photography, vibrant wedding, Yvonne and Christian, Yvonne and Christian wedding. Bookmark the permalink.