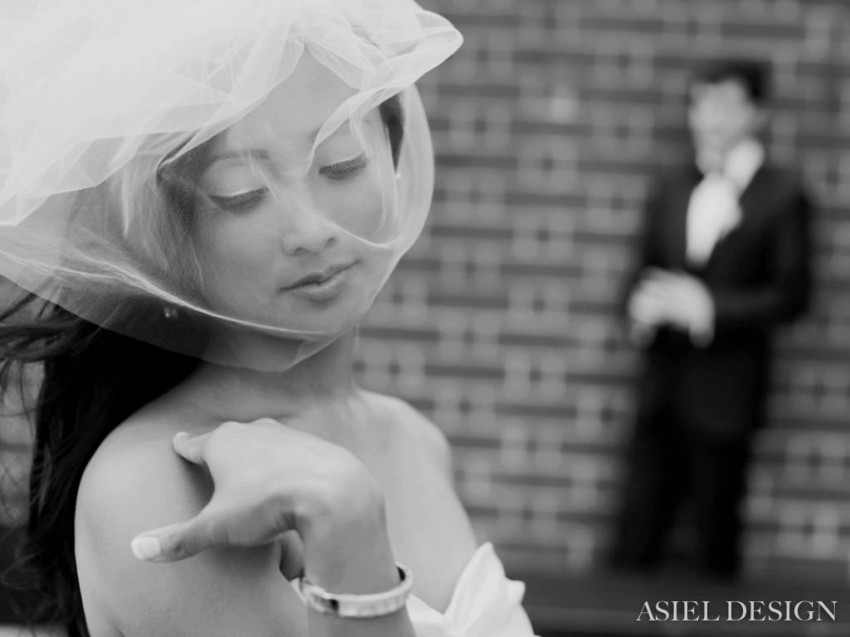 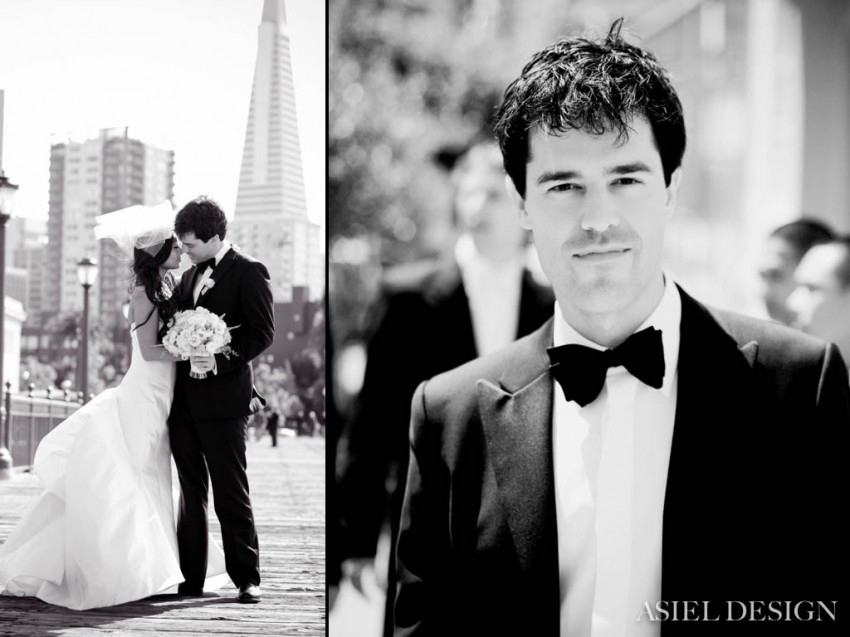 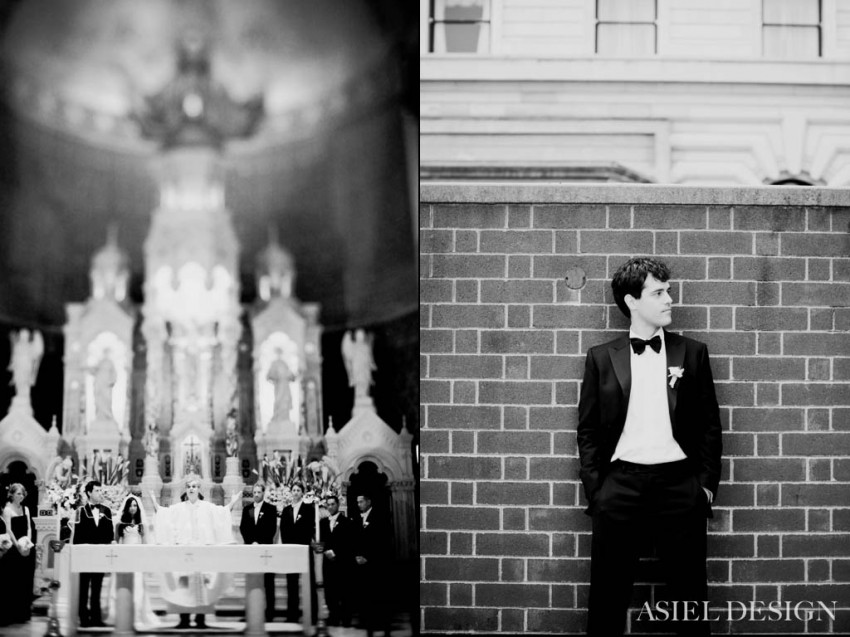 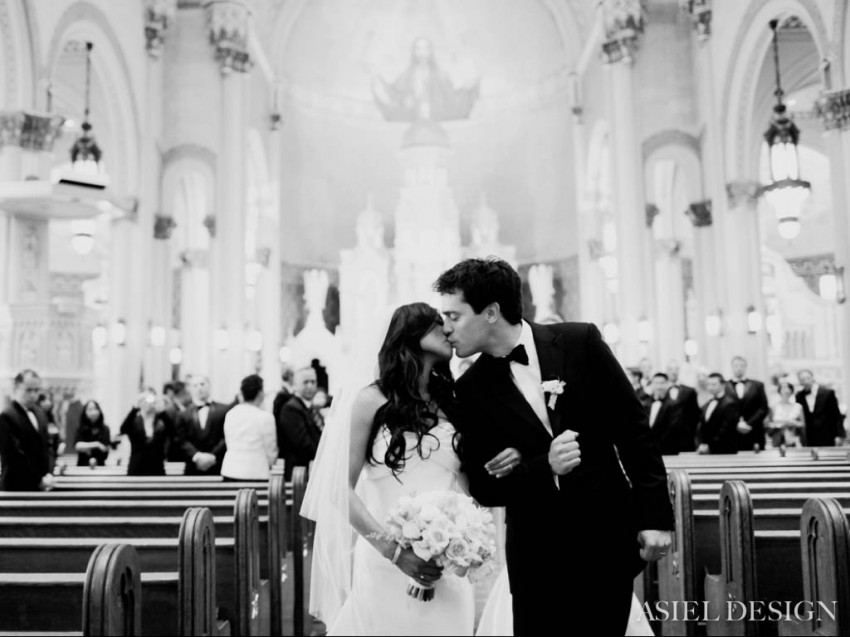 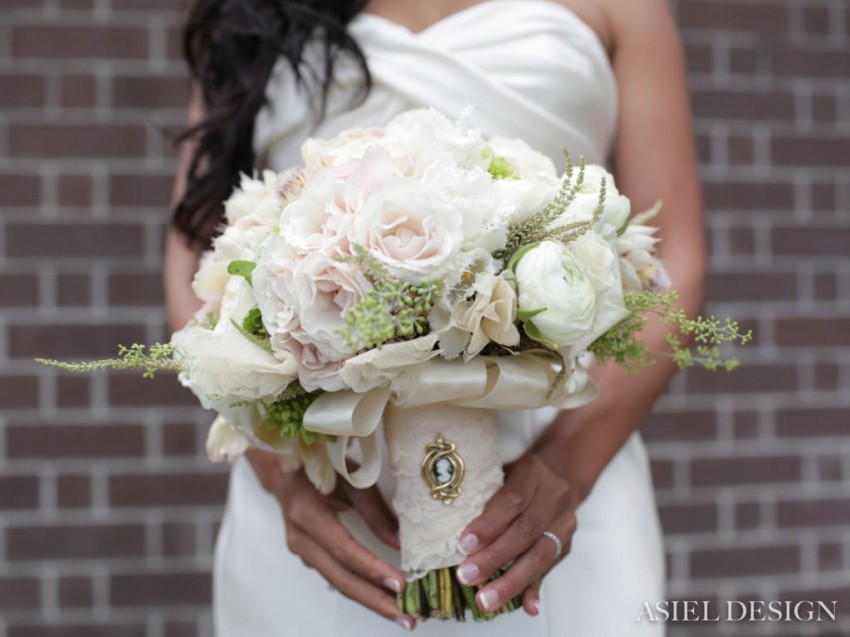 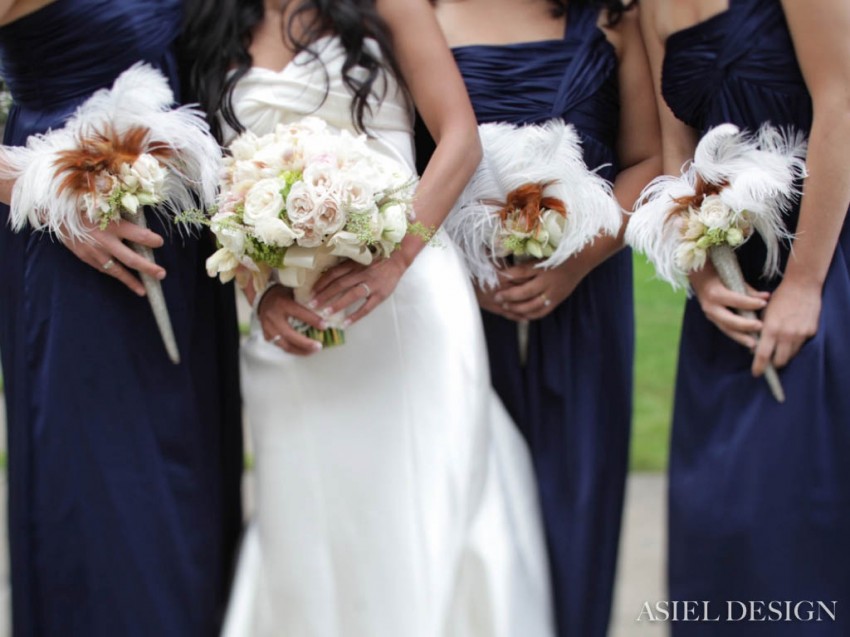 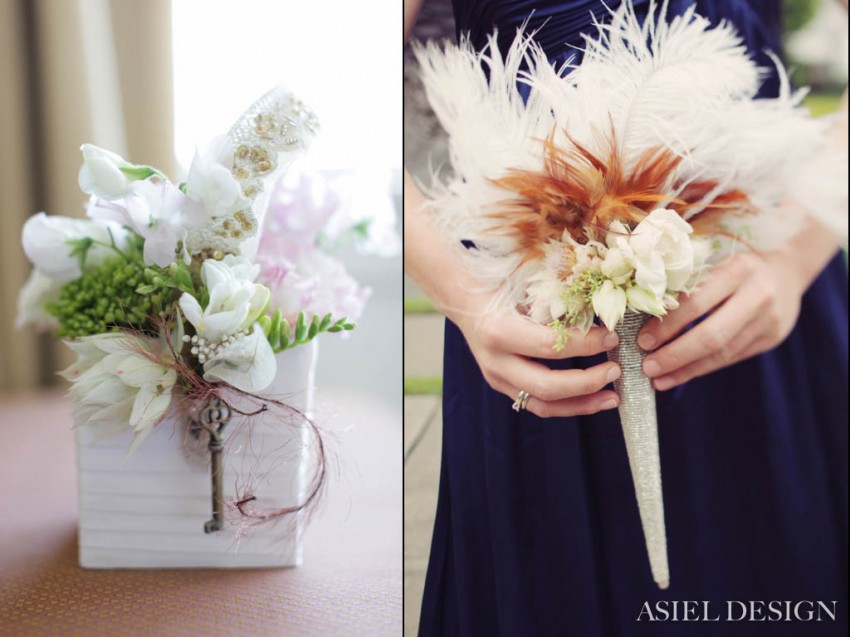 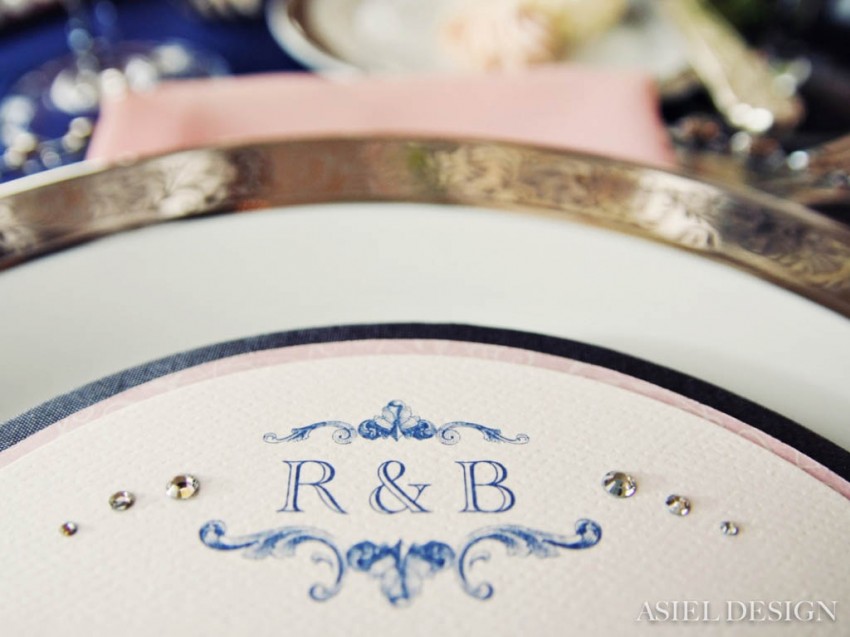 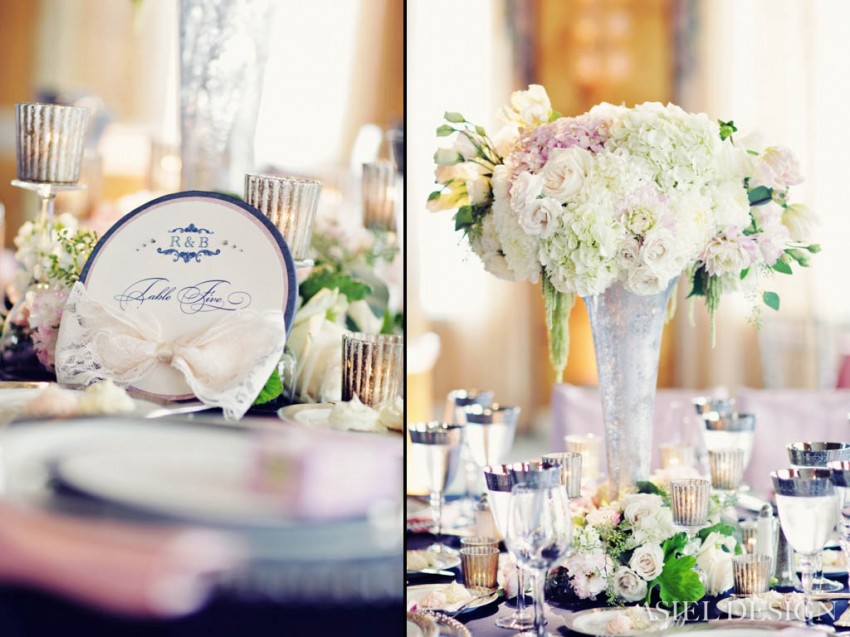 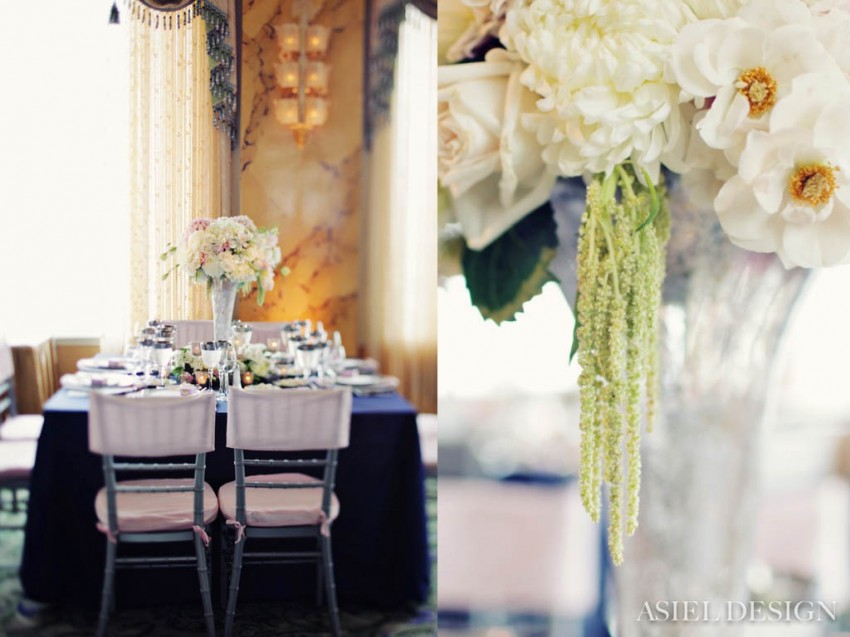 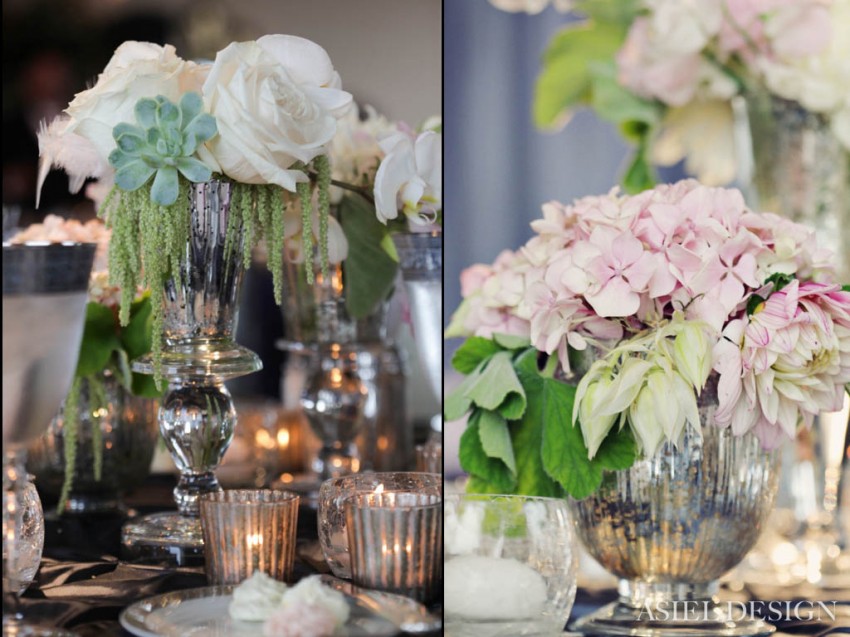 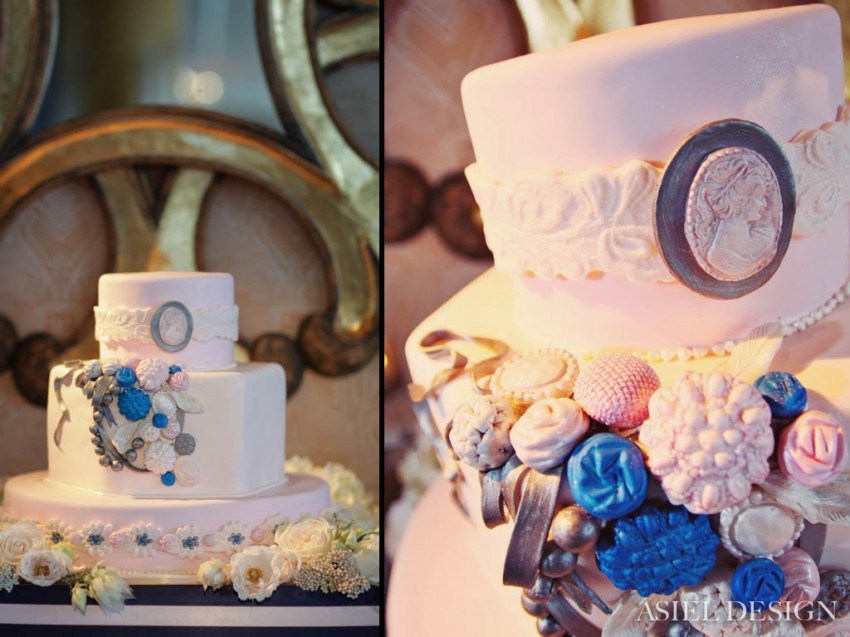 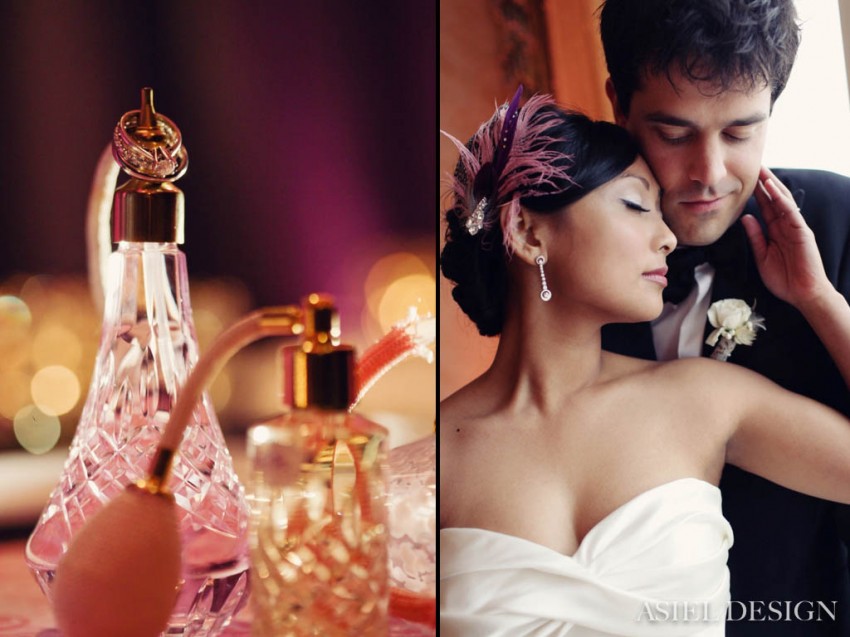 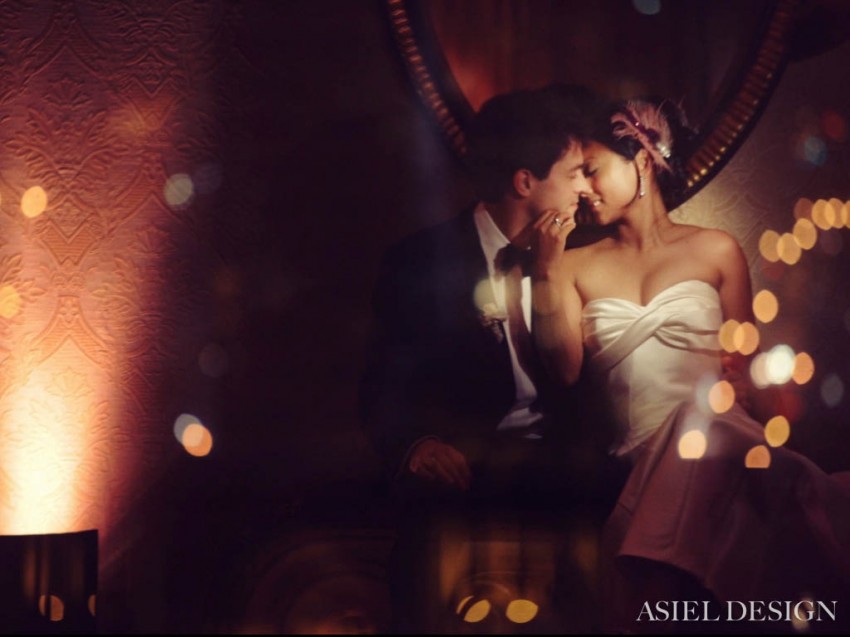 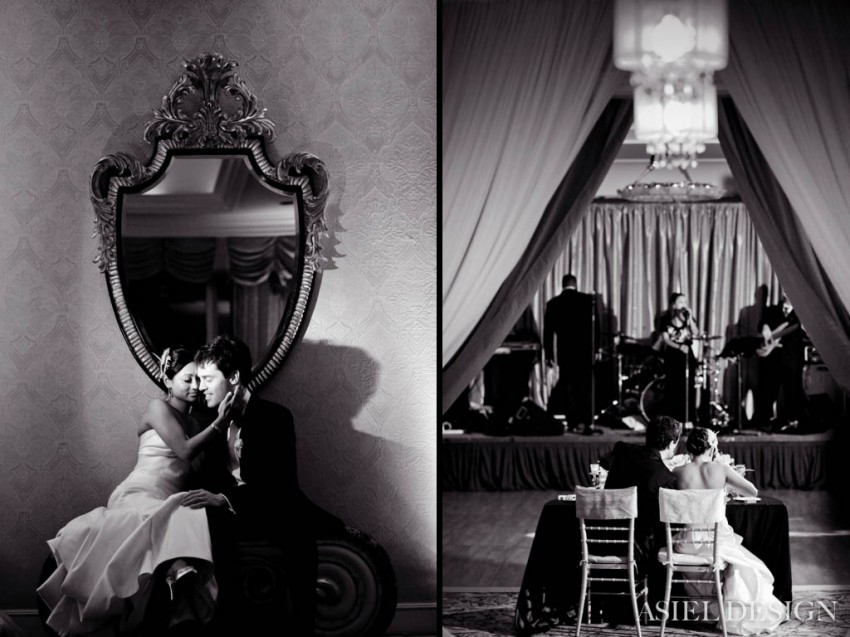 This couple got married at St Peter and Paul Church and then had their reception at the Fairmont, SF.  They wanted an elegant look for their event.  The floral tones for the personal flowers were variations of soft whites and creams.  For Rina’s bridal bouquet, we embellished the handle with a Victorian cameo.  The bridesmaid bouquets were unique as well.   They were made with white flowers and were accompanied by feathers that sprouted out of petite cones.  These bouquets were more reminiscent of a floral fan then a traditional hand tied bouquet.  This style of bouquet was an interesting break from the norm that worked out well.

The centerpieces were also comprised of the soft white hues and we introduced pale pink tones with touches of green.  There were two styles of centerpieces at this wedding.  The first style was a tall and lush.  This style added drama and color to the room.  Mercury vases elevated these tall centerpieces.  The base of them was sat on top of a bed of flowers with sporadic mercury votives at varying heights.  Although this centerpiece was lush it was not overwhelming, rather it had a garden feel to it

The alternating centerpieces were made op of similar flowers and the same colors scheme.  But it differed in the sense that it was a low centerpiece that was comprised of clusters of flowers. This style of centerpieces was still housed by mercury vases to give a cohesive look between the two styles.  This centerpiece also had a lush garden feel and we even stuck a few succulents in there.  They were unexpected but pretty.

Rina and Bram had a timeless wedding and we were honored to be a part of it.

We believe design begins with a relationship of trust with your wedding planner and event designer. When choosing an event designer or a wedding coordinator, we believe that you should feel listened to, understood, and guided through the process in a way, which helps you achieve a look and feel that is personalized to your style. There should be a connection with the designer’s work, esthetic, and a comfort-ability with the professionalism of the company they represent. Mutual respect between the client and the wedding coordinator or event designer is the foundation to a successfully designed event. We believe it is the client who holds all the secrets to their design – what they like, what excites them, and the message and experience they desire to convey throughout their event.
View all posts by Asiel Design →
This entry was posted in Ballroom, Church Ceremony, Classic, Fairmont, SF, Feminine, Marie Antoinette, Mercury, Pastel, Pink, St Peter & Paul Church, White. Bookmark the permalink.