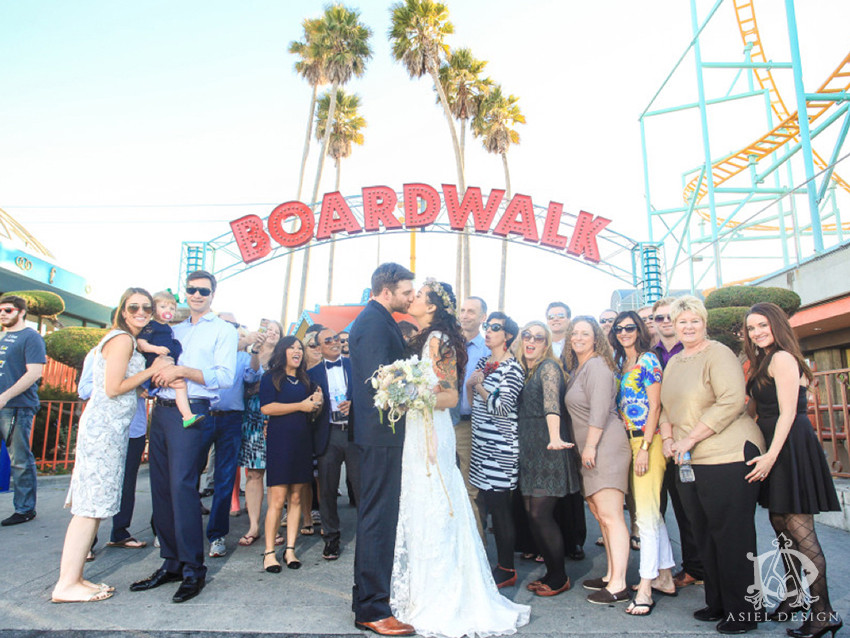 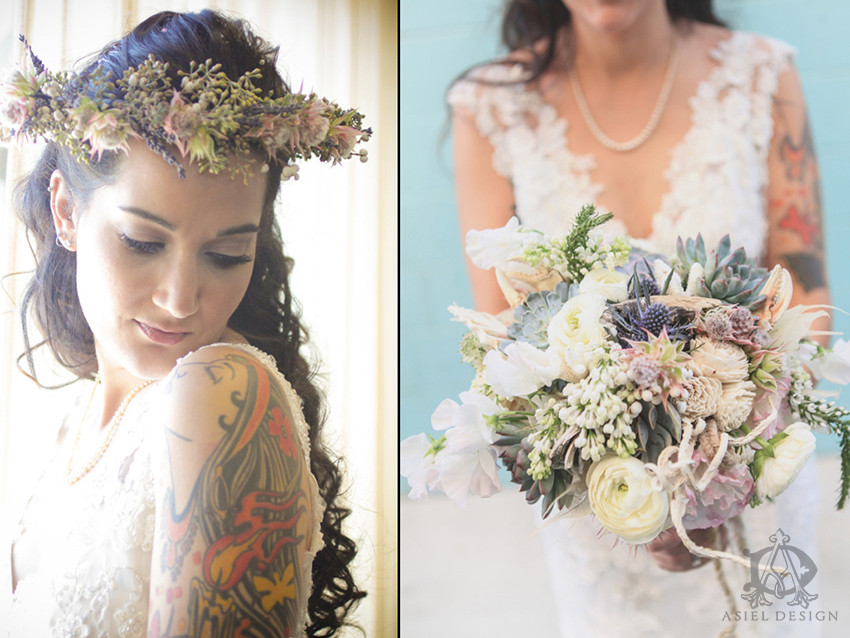 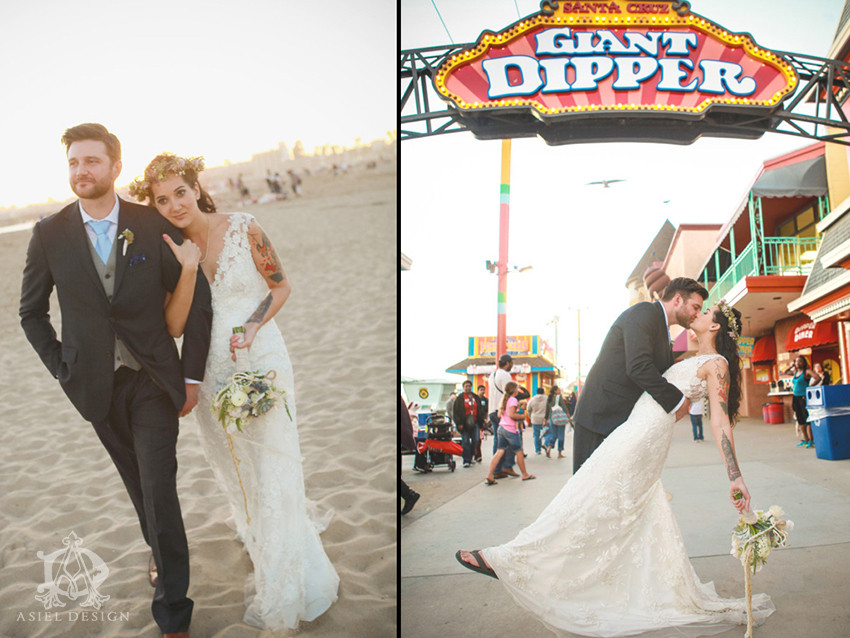 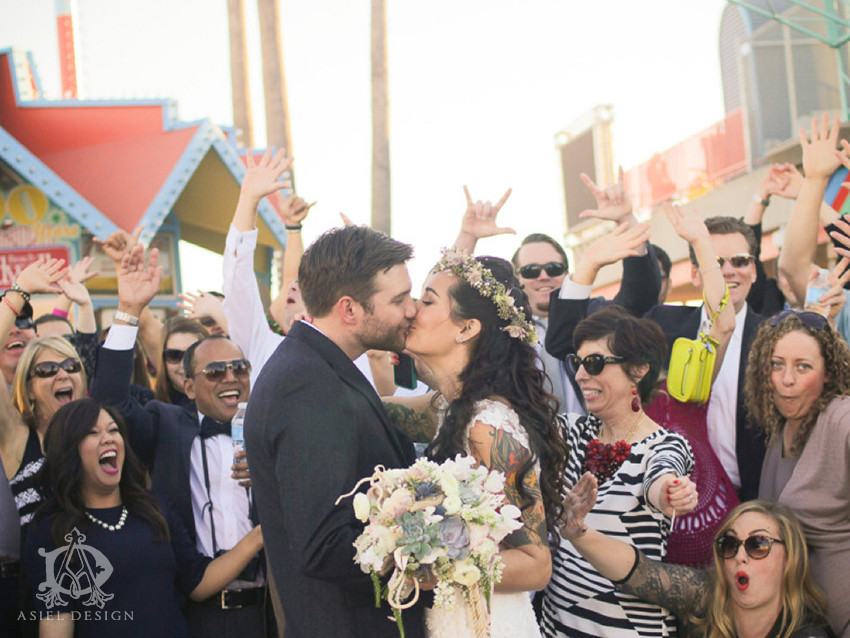 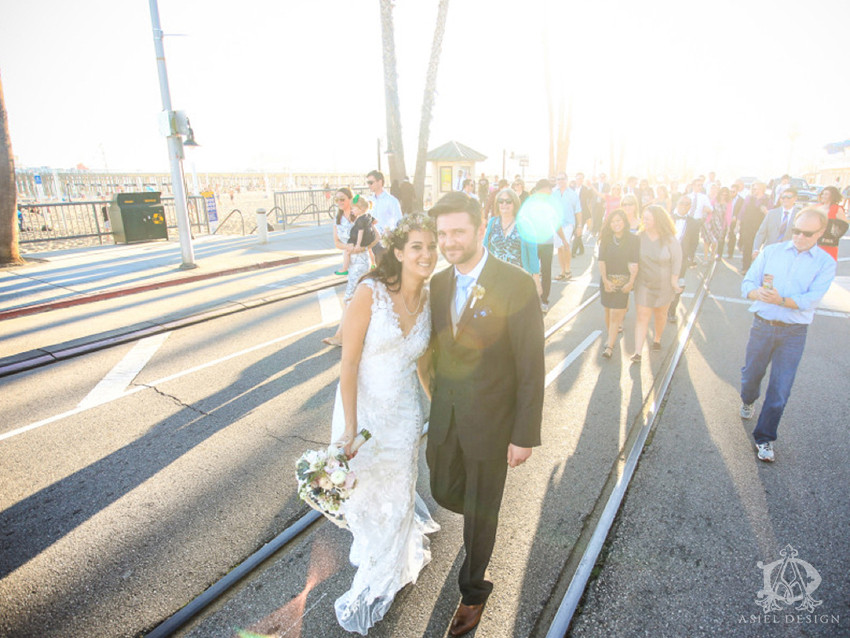 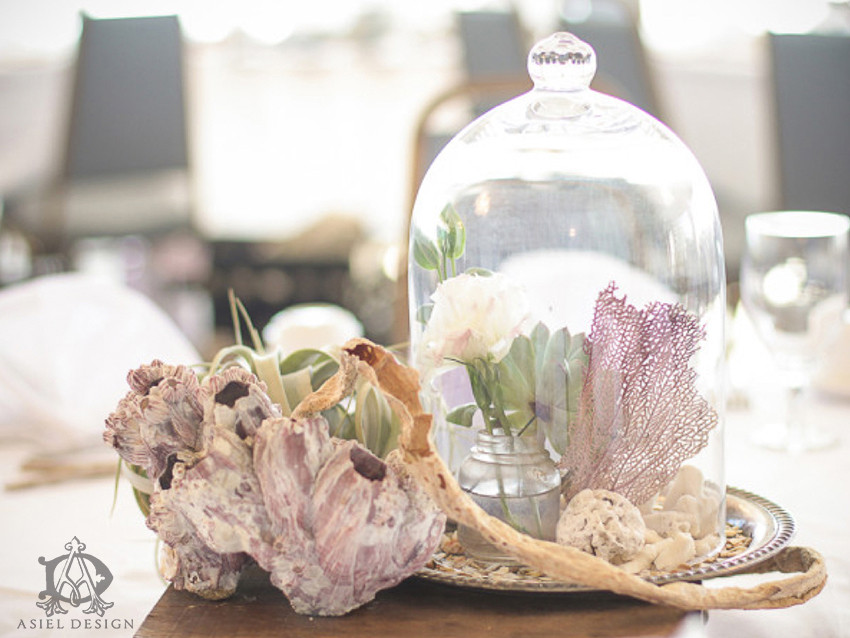 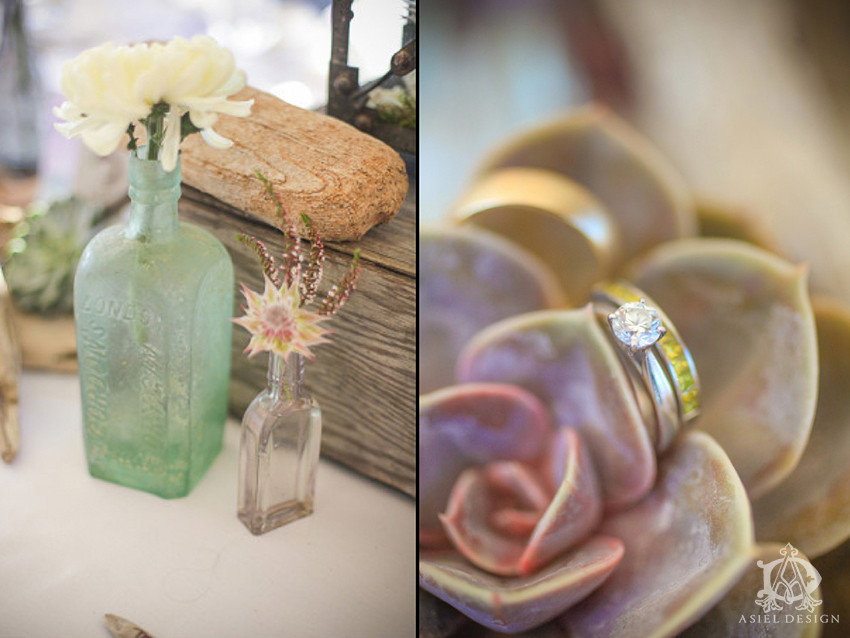 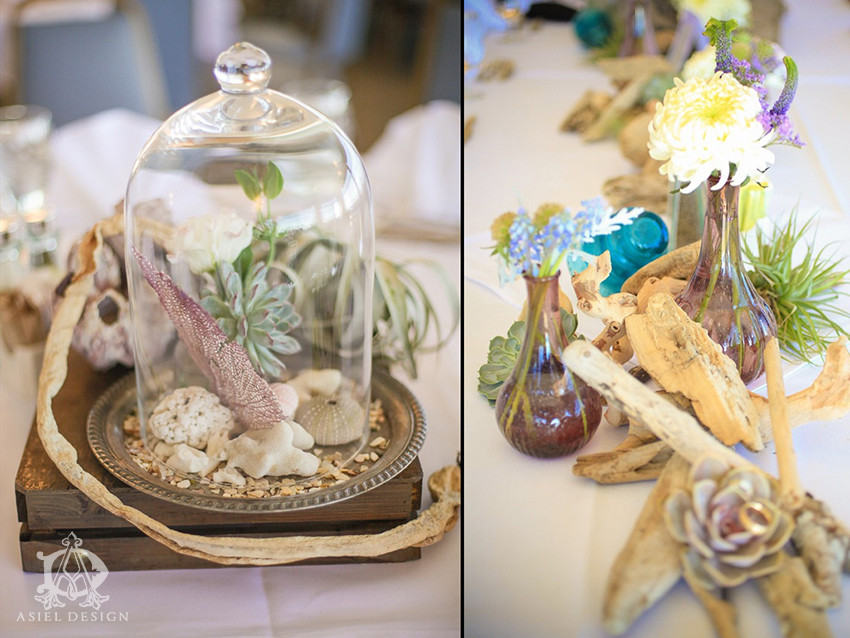 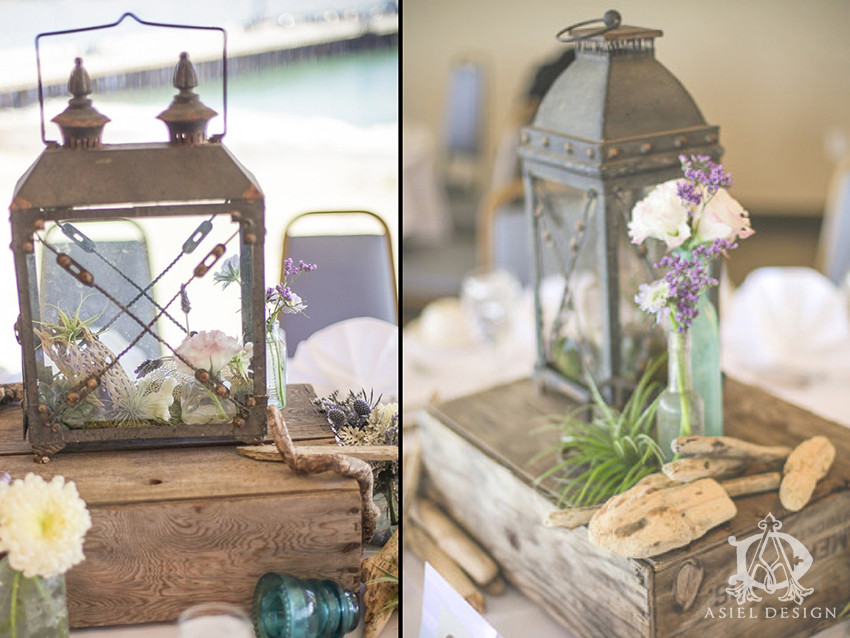 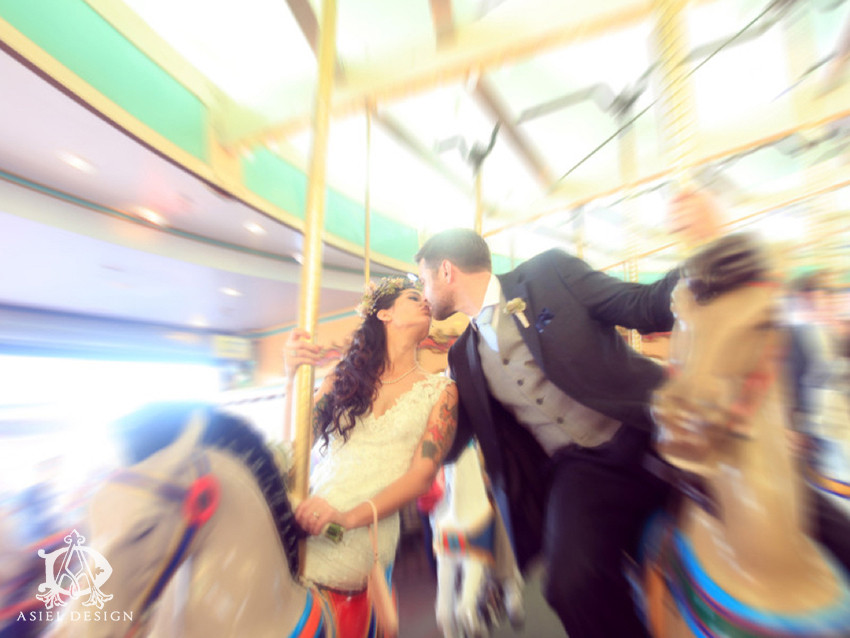 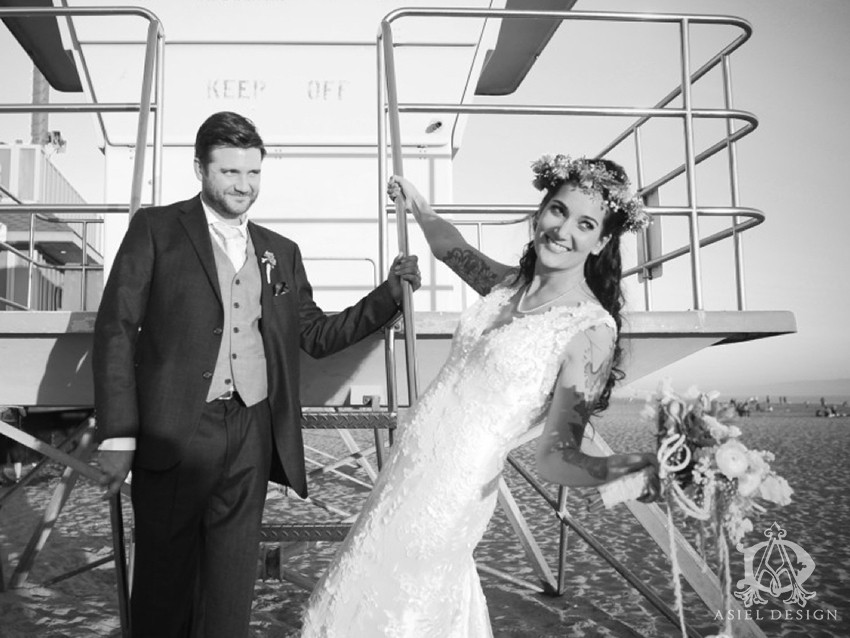 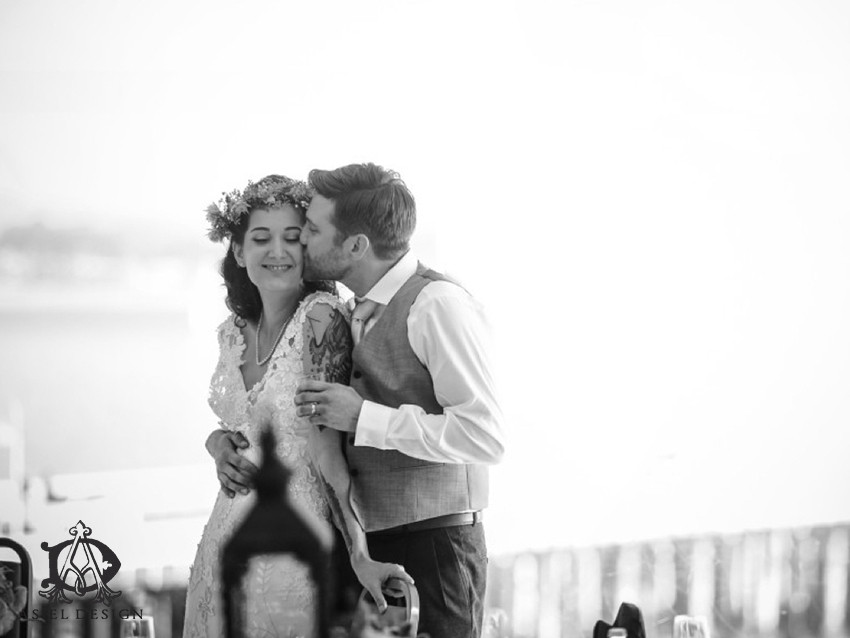 The boardwalk literally turned into their playground as the bridal party and guests took over, played games, and got to release their inner children by riding the merry go round. It was nothing short of spectacular! We took pictures everywhere we could, and even in places we weren’t allowed, but most importantly, Tallie and Adam and guests had their own style that came through in everything they did.

The flower style was a rustic and organic feel to compliment the culture and history that lay beneath our every step. Tallie had a floral head wreath and bouquet that had everyone in awe. For the centerpieces, we designed sophisticated, antique vessels that looked like they had been dragged out of the sea. To do this, we used drift wood and seashell accents with blush pink lavender, green, and pale blues and whites. This Nautical style is increasingly becoming more popular because it captures the depth and history of the space. And, for this Boardwalk Wedding, it was literally an escape to a boardwalk fantasy where you could literally hear the play and laughter from years past; it was magical.

It is always so much fun to work with such a history rich location. To have access to the natural color pallet, textures, and feelings – there is so much to get inspired by. Needless to say, Tallie and Adam had a wedding that will go down in history at the Santa Cruz Beach Boardwalk.

We believe design begins with a relationship of trust with your wedding planner and event designer. When choosing an event designer or a wedding coordinator, we believe that you should feel listened to, understood, and guided through the process in a way, which helps you achieve a look and feel that is personalized to your style. There should be a connection with the designer’s work, esthetic, and a comfort-ability with the professionalism of the company they represent. Mutual respect between the client and the wedding coordinator or event designer is the foundation to a successfully designed event. We believe it is the client who holds all the secrets to their design – what they like, what excites them, and the message and experience they desire to convey throughout their event.
View all posts by Asiel Design →
This entry was posted in 5k Floral Design, Beach Weddings, Green & White, Indie Weddings, Nautical, Pastel, Rustic, Weddings and tagged asiel design, beach boardwalk, nautical wedding theme, oldest surviving amusement park, playground weddings, rustic and organic wedding theme, Santa Cruz. Bookmark the permalink.